So much for the executive summary, but what does that mean for the new expo member? What is actually involved in going on expo?

Very few people, whether undergraduate or old lag, can afford the time to go on expo for the full period. People come and go, and people pursue their own particular interests within the larger context. But there has to be some overall strategy and some degree of planning. It is no good putting more resources into rigging than we have manpower to use, nor concentrating on so few goals that the cave is always crowded. So it is important that those doing the organising have a pretty good idea a few weeks before expo of who is going, for how long, and how hard they expect to cave. 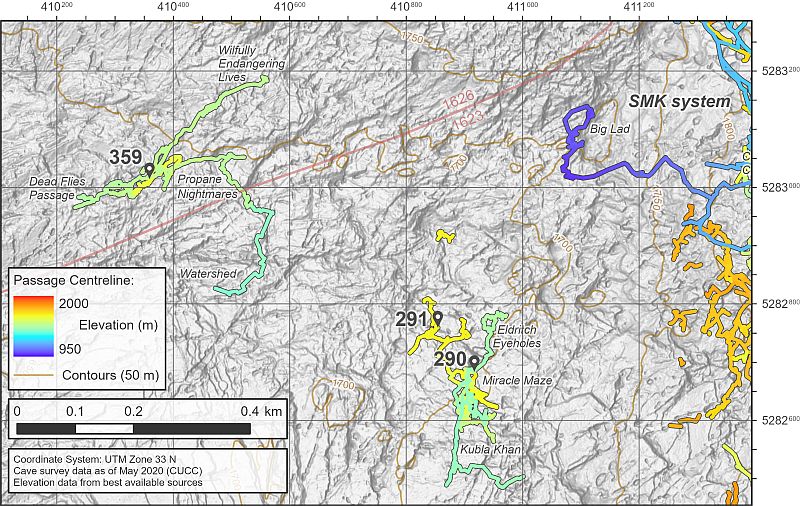 But don't expect too much from that word "organising" – expedition is not a boot camp! No one will kick you out of your pit and make you go caving (except perhaps in an emergency, such as a call-out). Nor is it entirely a holiday - once the effort has been put in to rig things, it is important that people get in there and do the work exploring, surveying, photographing and eventually derigging. The "organisation" is essentially a matter of pre-expo behind-the-scenes things like getting grants and sponsorship, buying tackle, coordinating transport and the like. On expo itself, it is a matter of judging which projects can reasonably be tackled by the number of people present, and suggesting the best lines of attack. This avoids rigging things which no one has the time or will-power to push, and ensures that there is enough gear to tackle the things which folk are keen to explore.

There are important differences between expedition caving and a typical Yorkshire weekend. On a tourist trip in the UK, a party will rig in, bottom the cave and rig out (or, at most, there may be a separate rigging in and rigging out trip on the same day). In Austria, a project cave will be rigged at the start of expo, and then numerous working trips will use that rigging until either the cave or the expedition finishes, and derigging takes place. This clearly places a lot more wear and tear on the ropes, which also tend to get muddier, so quality rigging is essential. Of course, some of this rigging is new exploration, not just "follow the P-hangers", so it is an exciting and challenging activity. Also, unlike a Yorkshire tourist trip, you must survey and describe what you find – logbooks write-ups form part of a long-term record of what has been done so are rather more important than on weekend meets at home. Surveying may be an entirely new activity for first-time expo members, but it is also a very important one, and one which it is worth making the effort to get right from the start. We have been doing this for nearly 40 years so we have a reliable set of procedures for converting muddy notebooks into beautiful wallcharts.

In Austria, expo is effectively split into "Base Camp" and various "plateau camps". Base camp is in the valley, near the gasthof, shops, river, lake and other facilities. It is here that we have the bulk of the documentation, computers, log book and survey book. The plateau bivvy camp is a short walk from the cave entrances, and are reached by a toll road (on which we have a deal which avoids paying each time) which ascends 900m to a tourist car park from where it is around a 40 minute walk (on good paths) to the edge of the plateau. From here it is a one-and-a-half-hour slog across rough limestone pavements to the main Steinbrückenhöhle bivvy site. The main bivvy has solar charging for lights and electric drills.

We also have other shorter-lived high camps such as Organhöhle (in 2017) and are planning (2020) a new site at Garlic Cave much further to the north west.

The plateau camps and and Base camp are linked by rugged mobile phones using a specific Austrian carrier to get adequate reception. Your own phone will probably not work so well and will not be reliable over much of the plateau. Trips are mostly organised by the people in top camp (we even have a whiteboard), and it is usual to spend periods of three or four days or so at top camp, alternating with festering at base.

On the other hand, the plateau a nature reserve where camping is theoretically not allowed at all, so we need to keep it as low-profile and undamaging as possible to avoid being banned. Camping is essential, not only for caving convenience and efficiency, but also for safety. Meeting these needs consistent with local politics is something of a balancing act which needs everyone's cooperation.

If we have a spell of truly awful weather, usually everyone will come down to Base Camp, and this is a good time for getting surveys drawn up, passage descriptions written, log books up to date etc. It's also not unknown for a certain amount of beer consumption to occur. This is also the case at "expedition dinner" which is usually organised somewhere in the middle of expo, when the greatest number of people can attend.

What to read next?

Obviously, those coming on expedition will have a better and more productive time if they know more about what goes on, what has been done previously and what our particular caves are like. I'd love to think that everyone would find time to read everything on the website. In reality, however, not everyone wants to effectively memorise the guidebook, and devour several books on the history, culture, geography, geology, food, weather and other minutiæ of their holiday area. Even if you are that sort of person, it helps to have some idea of where to start – there's about three long novels' worth of stuff on the site and much of it is of mainly historical interest, concerned with caves whose exploration is considered complete.

We have attempted to condense the "how to do it" material into an Expedition Handbook, which covers topics such as Surveying, Prospecting, Rigging and Rescue. There is also a rather embryonic section on photography, and some smaller sections that are also worth reading. This is still a fairly big chunk of stuff to read, so an effort has been made this year to provide a "primer" page for each section, which should be read by everyone new to expo. It is particularly important that you understand the aims of each activity, since a job done badly is actually worse than a job not done at all. This is especially true of cave survey and passage description, or, for prospecting, the recording of locations.

To get a feel for what trips are like, it is perhaps worth dipping into one of the logbooks for recent years. To get an idea of what expo will be trying to achieve, there is a "mission statement" for the current year. And to see how much potential there is, a glance at a recent Steinbrückenhöhle Question Mark list is a revelation. Leads are numbered by year, with the oldest first. Following links from any of these leads will get you into the relevant section of the cave description, which gives an idea of the sort of caving.

For the ambitious, there is a complete description of Kaninchenhöhle, which absorbed almost all of CUCC's expedition effort from 1989 to 1999 and now forms the largest single component of the Schwarzmooskogel system. The description runs to about 90 A4 pages when printed, so is rather too much to digest in one go. We recommend looking at the printed survey to get an overall idea of the cave and which parts have the most potential. However, as this is too big for a web page, there are now useful survey fragments incorporated throughout the main descriptions.

If you want to delve deeper into the site, use the site index and don't forget to use the Search capability at the bottom of the menu on the upper-left of most pages.