Over the almost four decades during which CUCC have been visiting the Loser-AugstEck plateau, they have found it essential to camp nearer the caves than the base camps in Altaussee (1976-82) and Grundlsee (1983 to present). The 1978 accident demonstrated the foolishness of trying to conduct long explorations without a high camp. Several people have been benighted on the plateau over the years and rescues in 1989, 2007 and 2016 as well as numerous other incidents show the value of rapid assistance from Top Camp in the event of a mishap underground.

From 2002 to date our only top camp has been in "204 Steinbrückenhöhle" (see below). In 2017 we (mostly UBSS guests) established a bivvy camp very close to Organhöhle (see below) which will be established more soundly in 2018.

The terminology of these camps has become very confused over time, as the campsites have changed. At some time, virtually every early camp has been called "Camp 1" by someone or other, and several sites have been called "Top Camp"! Note that it has been illegal to camp within the Nature Reserve (Naturschutzgebiet) area since 1993, and we obtain special permission every year for exploratory purposes.

CUCC's first high camp was set up in 1977, on a site identified on the first visit in 1976. This was on an area of pasture above a small limestone scar from Bräuning Alm. At the time, the springs in the valley here were the only reliable water supply we had discovered. There were caves nearby, as well as ones on the plateau to explore, so the site proved very pleasant, until washed out in one (of many) mega-thunderstorm.

Once most exploration was centred on the plateau, the camp at Bräuning Alm proved of little real value, and all exploration was conducted by driving up from the valley. The difficulties and dangers of returning across the plateau in the dark led to some cavers doing "overnight" trips, in which the cave was descended in daylight, and exitted in daylight the next day. The risk associated with this approach was that of falling asleep on the drive down, as Julian Griffiths demonstrated. Having stayed awake down all the seriously fatal hairpin bends, the car drove itself through a fence and down a 10m drop in the valley below. The mangled steering wheel, bent by a tree-sized piece of fence coming through the windscreen, became CUCC's "Driver of the Year" award at subsequent dinners.

It was realised that for overnight trips to work, there had to be at least a bivouac of some sort near the plateau. A tiny trickle of water was found, which could be used to fill a water container buried in the ground, and a single tent established just to the south of Schwarzmoossattel ("The Col") in 1979. This never really deserved the title "camp". It was never used again, as exploration in 1980 switched to the Stellerweghöhle area, and neither of the previous high camps were really of any use.

A really good permanent spring was found in a small climbable shaft a short way beyond Schwarzmoossattel ("The Col"). As this was adjacent to one of the very few flat areas of grass, and right next to the path as well, this has made an ideal camp site, and was the normal Top Camp from 1988 to 2001. Logbooks and Journal accounts at the time referred to this as "Camp I", despite its not being the first high camp. A few references are to "Camp 3", which tried to reflect the chronology. Later it was known just as "Top Camp". In fact, to minimise the impact on grassy areas, the camp alternated between the small site immediately adjacent to the spring and a larger (but boggier) area a little lower (used in 1994, 1996, 1998 etc.).

In 1988, and again in 1989, there was a small advance camp much nearer to the Kaninchenhöhle entrance, again to overcome the trials of crossing the very rough plateau in the dark. This was on a relatively flat area of low bunde (dwarf pine) just on the east side of the flat area of limestone on which the permanent survey station "VD1" is located, on the normal walk up to the 161 entrances on the col between the Vorderer and Hinterer Schwarzmooskogels. This was variously known as 'far campsite' or 'Camp 2', in the logbooks. A lack of water, sanitation, space and comfort led to this camp being abandoned.

It was hoped that in 1996, a new Top Camp would be established somewhere where access to the 161d, 'Scarface' entrance to Kaninchenhöhle would be easier, as all trips used this new entrance, giving rapid access to the majority of current question marks in the cave. Unfortunately, access via the Stogerweg proved to be more strenuous than from the old plateau top camp, and no usable water supply was found, so this campsite never came into existence.

In 2001 people decided to bivvy nearer to the the cave entrances. This involved putting up tarpaulins in natural shelters, and sleeping on inflatable lilos. The 40 bivvy is in the main 40a Eishöhle entrance. It is surprisingly comfortable as this entrance does not have a cold gale coming out of it, and the floor is very flat. It is luxurious for 2, comfy for 3 and can sleep 4. Water is collected by putting a tarp. in a steep gulley opposite with a hose to a butt in the bivi - very effective.

Cavers working in 204 (Steinbrückenhöhle) used the eponymous stone bridge as a bivouac. The sloping floor was terraced and flat sleeping and cooking areas were made. Tarpaulins were put up to reduce the drips and wind. Water was obtained from snow at 231, collecting drips in 231 and a funnel inserted in a grike on the roof of the stone bridge. Initially two, and later 3 butts were used for water storage.

This has been the main high camp used every year since 2002; it has been extensively reterraced to increase its capacity (as of 2003 it could sleep 12 and by 2017 22 could be jammed in), the water collection methods refined, and a cooking area created, to give an exceedingly comfortable bivvy site. A much larger single tarp covering the whole length, used since 2015, has made it much drier at the back, and the place is now very civilised indeed. See the bivvy rigging guide for tarp erection details. 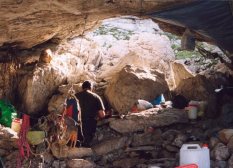 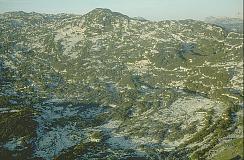 In July 2019 we discovered it full of snow, which required a lot of shovelling before it was habitable.

In 2004-2007, the 76 Eislufthöhle re-exploration project necessitated a camp close to the 76 entrance. A bivouac was established in a convenient rock shelter nearby. This was also used in 2012,13,15,16. Camping on the nearby grassy bit, which has room for 2 small tents is a lot warmer than staying in the bivi cave. 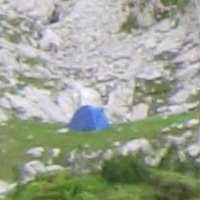 Sleeping 3 or 4, a bivvy with rainwater collection was established in a small overhang very close to Organhöhle and Guten Morgen höhle. This is a further hour or two walk from the main top camp at Steinbruckhöhle; and would be very hard to establish without the resources available at Steinbruckhöhle. The usual route goes very close to Tunnocksschaft entrance and within view of the entrance to Balkonhöhle - and then rather a lot further and over the ridge with a view down to the Appelhaus area. This route was cairned thoroughly in 2018.

When UBSS first explored Organhöhle they approached from the other direction. See their write-up in Descent (see page 18 of UBSS newsletter) for the horrendous walk that this involves.