These are two caves discovered in '88 by Adam which were surveyed (and surveyed to) this year by Wookey and Dave F. Both caves are along the side of the Hinter Schwarzmoos Kögel, about halfway between 161 and Eishöhle. Following the French traverse route along the shelf marked with orange spray paint from 161c will take you just below both of the entrances.

162 is about 200m closer to 161 than 163, and is about 250m from vd1. To get to it from there, head down the gully directly below vd1 (bearing about 100°)for about 130m, then turn right, angle right and traverse below the bunde field on the right along the most obvious shelf (you should find the French path here) for another 130m or so). The cave entrance is a 1.5m by 2m hole in the wall to the right of the traverse shelf with a very cold draught coming out of it. It is one shelf above the French path, and if you are at the wrong level you will miss it.

This cave is the larger of the two (33m deep, 159m surveyed length) and takes a good couple of hours to explore thoroughly. Through the entrance is a large chamber with a 4m by 8m crater in it. A 3m climb down to the bottom gives access to a 3m climb back up to the right, leading into the cave and a crawl at the lowest point of the boulders leading into a choked bit of cave with small solutional stuff in the roof. It is also possible to traverse around the left edge of the crater to reach a triangular crawl which goes for about 10m before it gets too tight.

The entire floor of this cave consists of small rocks and boulders. There is no solid rock anywhere horizontal, except halfway down the pitch.

After climbing out of the hole there is another 5m deep choked hole beyond. Traverses round to both the left and the right are possible, although a little care is required due to the low roof and loose floor.

To the right, rubble coming out of the bottom of a choked shaft almost blocks the passage but a crawl through to the left remains, with a strong wind blasting through the confined space. Beyond this constriction the draught is lost. The roof remains low on the other side, although it is possible to stand up off to the left where there is a 4m climb up to what looks like a way on but is actually blind. Moving around the boulder pile to the right leads to a big passage. There are a few large boulders 10m to the right with a 4m climb down between them leading to a tight choked rift. This was also dug into from the top passage by the extremely zealous original explorers! There is an alcove in front and a rubble slope up to the right. Round the corner to the right is another shaft-bottom rubble pile and a hole disappearing into the roof. At the top of the slope to the left is a 4m climb up through and around big wedged boulders to reach an impressive chamber 7m by 9m and 12m high. There is a possible climb up into an aven in the corner which probably doesn't go and has a couple of moves at the top which need protecting.

Back at the fork near the entrance, turning left and thrutching over a couple of rocks (another windy spot) leads to the head of a 17m pitch broken by a ledge 8m down. There is a bolt for a ladder hang on this ledge. Going off to the left allows a safe traverse past the pitch continuation to the bottom of a 6m high rift with some ice in it, slowly narrowing as it goes up.

At the foot of the pitch is what looks like an ancient phreatic remnant. It is about 40m long and 6m wide, and mostly full of rocks. To the left it is blocked at the end by the rubble coming out of the bottom of a big shaft. It is possible to work round the foot of this for about 3m to the left and 10m to the right.

Going the other way down the passage reveals a large snow column by the left hand wall. It is possible to climb up between the column and its containing shaft, presumably all the way to the surface, but no-one has managed it yet. Beyond this column the roof gets lower, apart from a couple of solutional avens and eventually a small shaft-bottom rock pile and a couple of small inlet tubes mark the end of the cave. 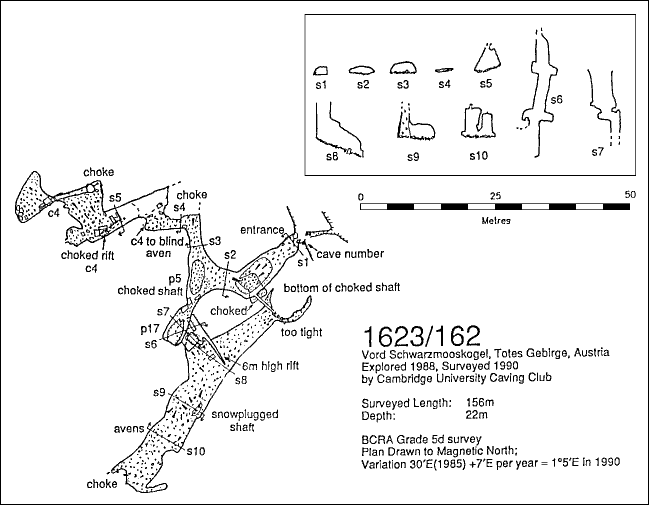 This is a fairly small cave remnant (17m deep, 58m surveyed length), but it does have a draught at the end suggesting more passage beyond.

163 is in the right hand side of a 15m diameter couloir which also has a couple of other tubes going off it. The entrance is low and wide (3.5m)and descends down a rocky slope for 20m to some impressive ice stals. There is a small tube in the roof on the right through which daylight can be seen. The cave extends another 10m past the ice stals in fossil passage until it chokes. A 3m climb up on the left allows access to a tiny rift which can be climbed down for a few uninspiring metres.

5m back from the ice stals, towards the entrance, there is a stoop under a massive boulder forming the left wall. Here is a 3m climb down into the second part of the cave. Downslope from here is a chamber with a small frozen stream running through it and a choked alcove containing another ice stal beyond the stream. The chamber through which the stream 'flows' appears to have been formed by the entire roof falling about 1.5 metres in one piece and it is possible to climb underneath this huge rock near the way in. Over on the right is a climb through an eyehole to a 3m climb down into a stream rift. This has a howling draught coming out of it but it is too small to get down - although the heavy application of a hammer might do the trick. 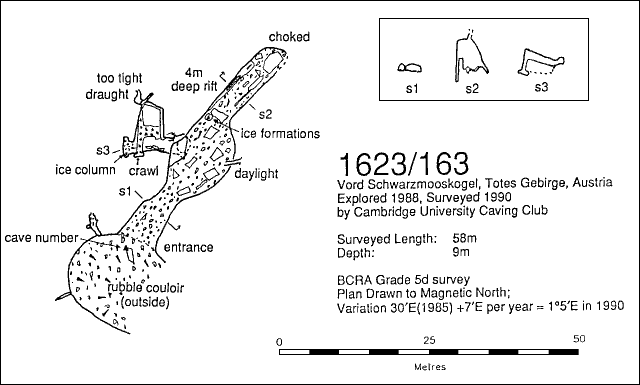