What to do for R&R when burnt out from too much caving, or when the weather is simply too hot or too awful to go up to the plateau?

Huge Abseil
Recommended by the local cavers, this 200m almost-a-free-hang cliff provides mind-bending sport, probably not to be repeated by any of those that had a go first time.
Bier drinking

In the "early days" Expo used to drink Reininghaus Bier in the Bar Fischer in Altaussee, as we didn't have a good socialising tent (or potato hut) to drink the more economic bottled variety. Nowadays, bier comes dead cheap, in crates, from the supermarket (and the preferred brand is Gösser). Expo always maintains a tally of bottled beers drunk, so that the right people get charged for it - and so we can report how many metric tons we got through each year. There is a corresponding Limonade tally.
Brewery tour 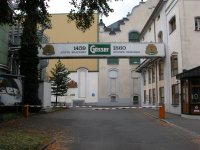 Gösser kindly sponsored us in 2004 and gave us an excellent tour of their brewery at Göss, just outside Leoben (two hours' drive from Base Camp; accessible on the train too). See the pictures.
Cake
Austrians do pretty good cakes for pigging out on calorie-restoration days when veggie-slop just isn't enough. It's best to point and say "Ein stuck bitte" rather than try to ask for exactly what you want. One person's mega-sticky-chocolate-cake arrived as a cup of cocoa through trying to be too clever.
Canoeing

on the lake is a pleasant way to cool off for all and sundry. There are also white water rivers, from the easy (ie. they need a bit of rain) to the "sporting" delights of the Traun from Bad Aussee to Hallstatt - in a deep valley nowhere near an escape route. This was first done by Vic Brown (6th in women's K1 slalom at the 1972 Olympics) with an assortment of exCS "Victims". More relaxing is to paddle from Grundlsee back to base camp, but watch out for Hilde's weir (see picture).
Car-fixing
Owing to being mainly impoverished students, expo has an annual crop of shit cars which limp across Europe with unfeasably large loads and equally crap trailers, which provides for epic travel. This usually results in at least one car being fettled at any time during expo, which provides relaxing spectator sport for everyone else in base camp at the time. One chariot which was more reliable than most, until its eventual demise through old age and several visits to Austria was Rover Richardson (middle pic, below), who had the distinction of being older than his owner. For an account of amazing persistence in the face of crap transport read "How (not) to drive round Europe" from CU 1992. This tale involves a Citroen van and a Volvo, also depicted below.
Cycling
Far more people seem to travel by bike in Austria than in the UK despite the obvious disadvantages of (a) ridiculous heat or (b) it pissing buckets and (c) it's very hilly. However, cycling down the toll road is very pleasant, or can be very exciting, depending on whether or not you are trying to break the club record of under ten minutes or it is (again) pissing buckets. Most people foolish enough to do it at all, only cycle up the toll road once (but there are exceptions, even to this rule).
Dachstein climbing

Dave Brindle tops out in cloud

This is the fine peak with glacier visible from the toll road on a clear day. Although the postcards would have you believe it is a 3k peak, this is really only 2994m, not that this detracts from a fine day out. One look at the "via ferrata" up the south-facing cliff is enough to convince everyone of the wisdom of investing in a seilbahn ticket up to the glacier, where summer skiing is possible if you are early enough. The climb itself is fun, and well-equipped with great reinforcing bar handholds everywhere, which probably explains the drongo density - a helmet or a suitable turn of speed are advised to avoid stone-fall.

It can be done in a day on foot from Hallstatt, but only if you are very fit. One of a plethora of festering activities centred around the conveniently nearby, but out of earshot of the campsite, lake (Grundlsee). Parking has become a problem if you have too much gear, but an inflatable dinghy is one of the most easily carried bits of kit, thus avoiding the parking meters.
Diving
There is not much scope for cave diving in CUCC's caves, though some has been done in nearby resurgences. However, for relaxing by the lake, a set of scuba gear and wetsuit or Michelin-man drysuit are ideal. The water is clear, and in Grundlsee lies an underwater habitat which is fun to visit, and an old lorry which is "verboten". Diving in Altausseer See revealed not the hoped for resurgence, but a few bits of 50's vintage human remains. Still it got us a go in the Feuerwehr's big red rescue boat :-)
Hang-gliding

Not for the complete beginner is the mind-bending takeoff from a ramp at the top of the Toll-road. On early expos, everyone thought that this was only for loonies, but now a small contingent of C.U.Hang-gliding Club have shown that it is even possible to land in a tree and survive.
High-frying

This is a sort of Russian-roulette with the base camp barbecue. A large Dutch Oven is filled far too full with oil, perched on the swinging barbecue above a large open fire and used to fry chips (at which point it almost overflows onto said fire). A swinging barbecue is ideal for getting lumps of meat off without getting burnt, but less than perfect when the victim is set the task of getting a large hot pan of chips off. Needless to say, we survived....
Hydro-speeding
Ideally, this means body-surfing down a river with a flat thing to ride on to protect chest and arms from rocks, and with fins (flippers to you) to give some degree of control. Needless to say, CUCC's version involved a body board or an inner tube on the river from Grundlsee down to base camp. "Reasonable" water levels are required, and getting out to walk round the weir is strongly recommended. "Interesting to find out how wet it can get before you hurt yourself or drown" (Wookey).
Ice creams
Austrians do ice creams every bit as good as their sticky cakes - and with the advantage of Schlagobers to appeal to the calorifically-challenged.
Mohr-im-Hemd
No, not the passage in Kaninchenhöhle, but the death-by-chocolate pudding which it was named after. The first challenge is to persuade the other attendees at the expo dinner to pay for the game if you win. The second challenge is to eat ten of these delicacies and not throw up for at least five minutes. It has been done :-)
Pedalo pedalling Used to occur from Fritz's jetty when base camp was at Altaussee, but is now more likely to be an excuse for a trip to Hallstatt, where there is also a handy gear shop and a diving school to get bottles filled.
Potato Hut festering

(See also Bier Drinking.) Festering in the evenings, or daytime in the rain, generally takes place in Hilde's "Potato Hut", so called because it is the meeting place of the "Potato Club". This august local organisation exists mainly to drink potato-derived alcohol, and engage in curling on Hilde's ice - more usually a lake at the time of year of our visit.
Radio-fettling
Ever since we had a set of really excellent communications equipment on evaluation from Philips in 1990, until the advent of mobile phones on expo 1999, expo hankered after a working set of CB-type radios. Top Camp to Base Camp is not line of sight, and thus needed a repeater, which (a) didn't work or (b) worked all the time and flattened its battery or (c) cut in and out continuously during use or, very rarely, (d) worked perfectly. The temptation to 'improve' it during time (d) resulted in hours being spent fettling it in states (a) to (c). For better (probably) or worse, this activity is now pretty much a thing of the past, owing to the advent of mobile phones.
Ropewashing 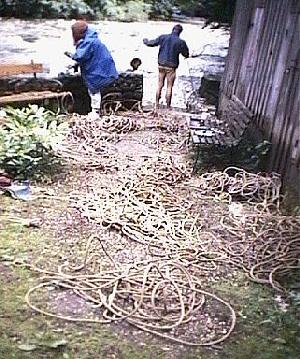 OK, I admit, this is really caving, but it happens at base camp and is refreshing if it's hot. However, it can be a bit epic in the river if it is in flood, in which case a Tyrolean traverse over the river is a sporting game.
Salt-mining
There are Salt Mines at both Hallstatt and Altaussee which are worth a visit. The latter were used as a stash for huge amounts of stolen art treasures by the Nazis, a fact that they keep strangely quiet about, given that it was the brave action of one of the local workers which saved them from being dynamited.
Swimming
Either in the river behind the Staud'nwirt or in one of the lakes, where the top metre or so gets quite warm in hot weather.
Sunbathing

Can be done almost anywhere, when it doesn't piss down - but usually combined with other activities at the side of the lake. However, more rays can be picked up at Top Camp in the unusual event of good weather and not caving.
Tobogganing

There is a dry (metal trough) toboggan run worth a visit near Bad Ischl. Wear long sleeves and trousers if you value your skin - doing so enables you to dispense with the brakes entirely.
Trisselberg ascent 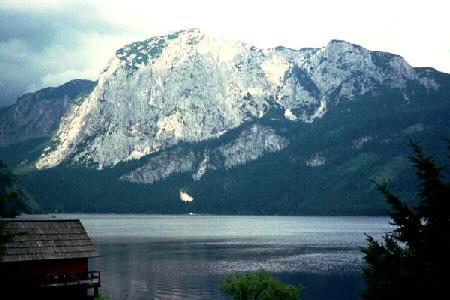 Of six expo attempts, four have succeeded - in 1984 and 1990, and 2007, and 2011
Tyrolean traverse
Has occurred towards the end of expo when large amounts of gear, particularly rope and pulleys, ends up down by the river for ropewashing. If the river really is too epic to stand in, a tyrolean traverse from Hilde's to some trees opposite can provide an awesome sense of exposure and not a little danger !
Via-ferrata
Expo 2007 found that a new via-ferrata had been put up on Loser, starting slightly above the level of the Loser Hut, about 60m along from the entrance to LoserHöhle. It is short and steep, and has proved exceedingly popular with expo-goers as a diversion of a couple of hours on the way up to the plateau. Others in the area have also been ticked off - including a couple of very long ones on the Dachstein Sudwand.
Windsurfing
Yet another lakeside activity - this one really is easiest if there is some wind, but as long as this is not too strong, it's a good game for total beginners (unlike Hang-gliding, for example).