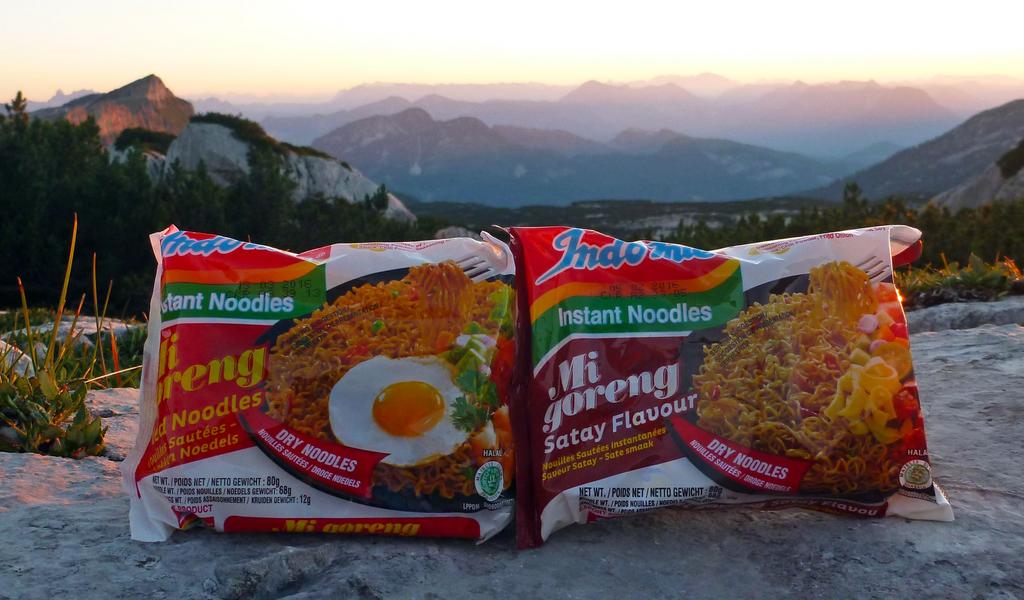 It can be more cost effective to order online and get the order delivered than to drive to a supermarket and get it yourself. Delivery costs can be only Â£2.50 if you pick the right time. The following deliver (2018) to addresses in Cambridge: Check major supermarkets for discount offers before ordering from specialist online stores for curries, e.g. Though these sellers also have discount offers sometimes. Other places which don't deliver which are worth checking out are Lidl (Cambridge) and cashncarries (if you have a card).

In 2018 Rachel T. contacted sports/expedition nutrition companies for protein powder, bars, boil in the bag meals. All were small companies, half of which were based in Leeds or Cambridge and had tailored emails. But in every case we were too late for their 2018 "sponsorship year". One company recommended sending applications before November or December, of the year before expo.

This is a big unknown. Usually buying the same as last year is a good guide, but in 2016 a serious attempt was made to understand how much food is eaten per person. In 2016 there were a total of 378 top camp nights:


* - this is bodged and approximate. Don't entirely rely on the couscous and oatso numbers. 450 curries were bought in 2015.

Curries and noodles and soups

We buy a lot of "Ashoka" brand curry packs (liquid pouches) which are supplied by almost everyone.

For dried noodles, we generally get "Indomie" brand, see in context

For dried soups, Elaine says (2017) "don't get the basics ones, they are horrible. Get the own-brand one-step-up ones". But also be very careful to get the ones which are instant and not the ones which have to be cooked in a saucepan for 10 minutes - which look just the same - so read the instructions.

Any friendly asian food supplier will order ~300 curries for you, e.g. down Mill Road or Cherry Hinton High Street in Cambridge. Sophie did this in 2014. Wookey did this in 2015 when the price was about Â£1.05 each.

We took advantage of a two-for-one offer on Ashoka curries with The Asian Cookshop in 2017 (Elliot) and 2018 (Philip S.). This is a BOGOF but the process is a bit odd: when you order N curries of flavour A, you also specify that you like flavour B; and they will then send you N curries of flavour B for free. See 2017 invoice and 2018 invoices for examples. In 2018 there was a time-limited offer on selected Ashoka curries from Morrisons which we took advantage of, taking up the slack with The Asian Cookshop.

When buying dried noodles from Spices of India beware: when it says BOGOF it only means for the first 12 ietms of that type. So you can pay much more than you expect. For reference, Indomie dried noodles are 38p/pkt individually in Cho Mee, Mill Road and Â£14.99 for a box of 40 from The Asian Cookshop (i.e. 37.5p/pkt), but you do get free delivery when ordering online. This price is hard to beat.

Use the online shopping systems for the big supermarkets to compare prices for things we are buying a lot of, and look for discount offers.

Think about calories as well as cost per kg or per packet. (Luke S. calculated that the curries on offer at Morrisons in 2018 were work out at 3.5p per calorie.) Milk powder is cheapest if it is is skimmed milk but this might not be what we want (even though skimmed milk has proportionally more protein in it).

It is vital to buy instant custard, instant oatso and instant hot chocolate. Never get the custard or oats which must be cooked, or any hot chocolate that you can't just drink as soon as you have put hot water in it. Yes, it is more expensive that the types which need cooking; no, don't buy it.

This also goes for instant soups: see above.

Mornflakes Superfast rolled oats have the same cooking instructions as Oatso, but do use *hot* water.

See the special note The Wrong Porridge on this and how to decide whether what you are buying is properly "instant".

The bulk food order quantities do not include flapjack. This is made in the UK before departure. See the Expo flapjack page.

We always need instant coffee (and lots of tea-bags). The issue of ground coffee arose during 2017 as personal supplies were raided and the general appreciation of the stuff raised the possibility (in 2018) of providing this as standard expo fare.

While buying coffee beans would be cheaper (64p/100g), having yet another piece of equipment (a grinder) at the crowded tatty hut would be awkward. Hitting socks full of beans with rocks at top camp would also be amusing when un-ground beans would inevitably get carried up. The tentative conclusion is that Sainsburys Basics ground coffee for filters would be adquate, e.g. "Sainsbury's Fairtrade Continental Style Coffee, Strength 5". A number of strength grades are available all at the same price of Â£1.01/100g.

In 2019 we brought out lost fo Sainsburys Basics stronga nd medium-strong ground coffe and hardly any instant coffee was drunk: none at base camp.

Knorr instant (1-minute - read the label!) soup was good, so we don't need to buy that in the UK.

Supplies of other food and ingredients, such as dried fruit: sultanas etc. and other flapjack ingredients can be got from specialist online suppliers such as Buy Wholefoods Online or going to Arjuna on Mill Road (which has a bulk store off Gwydir Street) or The Daily Bread cooperative in King's Hedges (Cambridge). Daily Bread have an online price-list and here is the June 2018 copy.

We don't have a regular order for this sort of thing yet, but think about adequate suppies of

When making notes for next year and the people who will do this after you, please be more precise than your predecessors. How much is "one large drum-full" of packet soup for god's sake.

Back to Expo Planning Guide.