The entrance is situated approximately 400m NNE of the high point on the ridge known as "Bunter's Bulge" in previous editions of "Cambridge Underground", at the base of a wall to the left after passing a sandy depression, when walking from Bunter's Bulge.

A body-width passage formed by a wall on the left and a large detached slab on the right descends for about 5m at 45 degrees with occasional glimpses of daylight above. A cross passage is then encountered. This blocks off to the right after a few metres, but to the left descends to meet the base of the wall. To the right a 20-22 cm squeeze is passed laying on one side. After 2m of further tight progress, the rift opens onto a drop. A steep tube now descends for about 12m to a small chamber and with care can be descended free.

From the chamber, the passage curves to the left and opens onto the head of a 7m pitch, which drops onto a large ledge. A rebelay just over the lip of the ledge at the left hand side gives a further 18m free hanging pitch to a landing on boulders several metres across, which appear to be jammed across the shaft.

A narrow rift around a corner stops at a drip and a small pool. The way on is through a gap to a hole with a jammed block. Climbing down onto the block leads to the head of an 18m pitch which rapidly opens into a huge split-level chamber. The pitch lands on "Big Bertha", a boulder some 4m diameter.

To the north a narrow rift has been followed for about 10m to a tight vertical drop of at least 5m down the rift, but this has not been pushed. East from Big Bertha leads to a 5m drop to the lower half of the chamber, which is floored with loose rock. A doorway to the left leads to a 7m pitch to a small stream. This disappears down an impassable slot, but is met lower in the cave.

From the doorway, a climb up behind a boulder propped against the side of the chamber leads to a saddle. One side rapidly curves up to the roof. The other ascends over very loose boulders for at least 25m (gaining about 15m in height) until the roof is met. This area has not been exhaustively pushed, but seems unlikely to lead anywhere.

Descending the other side of the col gives a series of ledges via 5m, 7m and 8m pitches, in a canyon some 5m wide and at least 15m high. The stream enters at the bottom of the 7m pitch. Following the pitches, the rift continues down a moderate slope and round a corner, with a final short 4m pitch to a soil and rock floored chamber.

A strong draught can be felt rising around the edges of the chamber. It is possible to descend in a number of places amongst rocks and soil down a steep slope, but the area is very loose. The roof slopes down to meet the floor and no ways on were found which follow the draught.

Near the bottom of the previous pitch, a 5m deep circular pit in the floor can be descended. This takes a large drip from the stream above. At the bottom, a tight 22-26cm rift leads on for 3m to a further 3m pitch to a small chamber. An impassable passage leaves this chamber, and a window from the chamber gives sight of the passage beyond widening.

Although there is no draught at the final chamber, this point is likely to be below the level of the soil and sand choke, and it is possible that the draught bypasses this section. Consideration is being given to returning to this chamber in 1988 and to hammering open the window. The cave is tending in the direction of the 144 and 143 entrances to the Stellerweg-Schnellzughohlen system, and seems to be following the line of a fault visible on the surface.

A surface survey is needed to determine the exact altitude of the entrance, however it is estimated to be at or a little above the 144 entrance, the highest entrance prior to the German-French discoveries of 1987. It has some potential as a stepping stone towards entrances higher along the ridge, which are needed if significant additions to the depth of the cave are to be found. 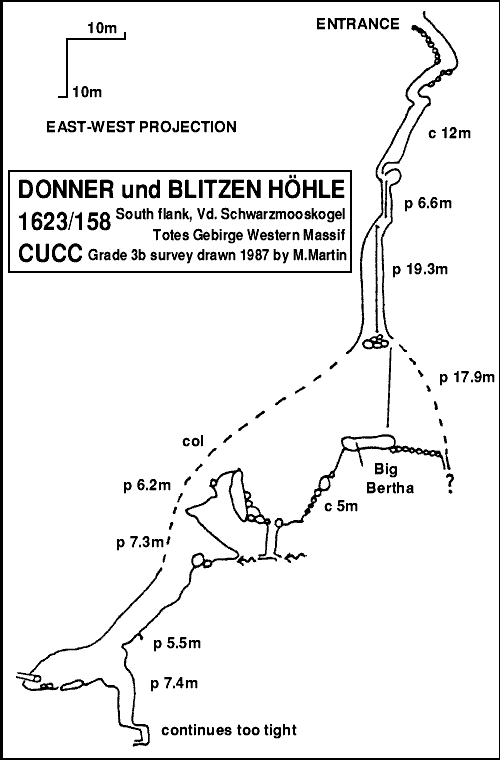