Tunnocks - Set up Camp and Living the Dream

Weds 29th I had spent a year dreaming of where the 5m diameter phreatic tunnel "Octopussy" led, from the bottom of Kraken chamber. Sitting on a knot at the end of a long length of 6mm cord, the tunnel ramped down at 30 degrees but we really had run out of gear and time on 2015 expo. So it was wonderful for Anthony and me to return together with Nathan, laden with a fat tacklesack each and picking up two more and drill left by Wookey and Nat on the way down. Kraken was roughly as we remembered it and Anthony and Nathan set about leveling the dry mud floor in the large alcove we had identified as our bivi location. I collected water, installed the antenna for the OUCC System Nicola (the original) that I had borrowed, and installed the lavatory: 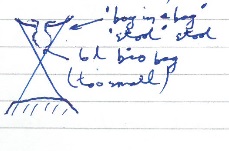 WARNING: Approach the crapper in a way that a male porcupine may approach a female, ie. very carefully. Andrew's specially made bivvi tent was eventually suspended from the roof, with one corner requiring a large boulder to be rolled uphill by the three of us to act as a footstool to place a bolt in the roof. At 9pm we plugged in our radio for our pre-arranged call to Steinbrucken, only 650m distant according to the survey. We heard the same noise as we heard on the surface when testing it, but no voice. Nothing. We enjoyed boil-in-the-bag curries with couscous and slept soundly. Thurs 30th June We rose to make our 9am call and this time couldn't even hear any noise - total silence. We had produced too much humidity for the bivvi tent for it to breathe, so we had an enforced 3hr fester to dry out the sleeping bags and set off for the bottom at 12:30pm. Anthony placed a second bolt at the top of Octopussy, and replaced the short length of SRT and long length of 6mm cord left in situ from 2015 with a 100m length of new 9mm. He descended the ramp and a while later called up to say if we wanted to reach the bottom we should bring more rope. Nathan took what we had, and soon all three of us were looking around at a 10m diameter phreatic tunnel that we had dropped into. It was a beautiful passage in pale limestone with many delicately fluted formations in the floor.

"Octopussy" is a 5m diameter 100m long phreatic tunnel that ramps down -due to the West at an angle of around 30 degrees. It drops into "Living the Dream", a series of phreatic tunnels. To the North is ongoing unexplored, with a phreatic ramp heading up East parallel to Octopussy (QMA) and a possible choke to the Northwest (QMC). The south, Living the Dream is initially 10m diameter and reaches a crossroads after c. 30m. The main passage heads East up a ramp to a horizontal dry cracked mud floored passage. This ends with a junction with a climb down a ramp East to the head of a 20-30m pitch (QMA) or a climb up a steep gully to the West which leads to a potential 25m traverse over a pitch/rift (QMB) and a hole down (QMC). Back at the crossroads, 30m South of the junction between Octopussy and Living the Dream, a dry mud floored passage meanders South for 50m, past several passages to the East (the first connects in a loop, the second is a QMC and the third appears too tight). At the southern end the passage ends in a 32m pitch (QMA), Psychospeleogenesis (?) in a rift heading approximately East-West. The third passage from the crossroads heads initially West, into a passage heading off SW downhill (QMB) and the main passage meandering in a generally Northerly direction. The passage is generally horizontal with two dry U-bends according to the angle of dip. Two passages head off to the East, probably connecting (QMC). After a short crawl the passage continues Northwards (QMA).

With c. 300m in the book we headed out, me adding two bolts to Tentacle Traverse and all stopping for soup at camp Kraken. We left camp over 7-8pm, staggered for safety, exiting over 12am-2am not necessarily in the same order. 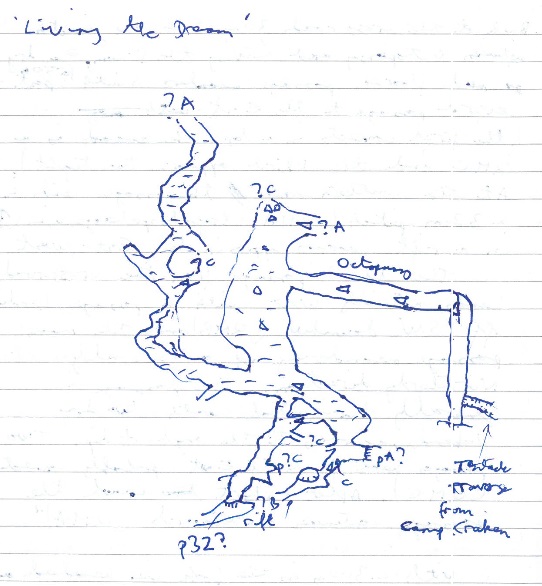