Impressd by the progress made at the bottom since last year. Kraken is enormous! Our objective was to shine Andy Waddington's bike light right around the high levels of Kraken to look for any leads. Crossed the lip of the pitch (down to the low level Kraken) to the LHS of the chamber opposite the pitch rig. Shone the light to the far side, couldn't see any passage but couldn't confirm there wasn't anything. Tied rope round a large boulder that look a large turtle and reach a walkway (Turtle Traverse) around to a steep boulder slope heading up. I climbed up the slope (trying not to think about he 65m drop at the bottom) to reach a drafty boulder pile. Trough gaps in teh boulders looked promising. Reaching the top of the boulders I despatched Anthony to collect the drill from the bottom, which was in fact a pretext for me to open my bowels which had somehow loosened. Fleur and Anthony came over - Fleur took a photo of Anthony as he prussicked up the big pitch. The string wrapped round a boulder was upgraded by the drill and we entered the drafting horizontal passage that led off on the far side of the bopulder pile. After only a few legs we reached a two metre climb up into a large drippy chamber. We shone our aven spotter around, to see a possible HL up to the left. I optimistically ascended a slope to the left and squeezed under an extremely large boulder and popped out onto a ??? into the high level. Fleur and Anthony surveyed in and then we crossed into a large dry chamber with block cracked mud floor. There was another drippy pitch down which we left unexplored. Apart from this there was no way on. We rigged the return properly just in time to derig it again. 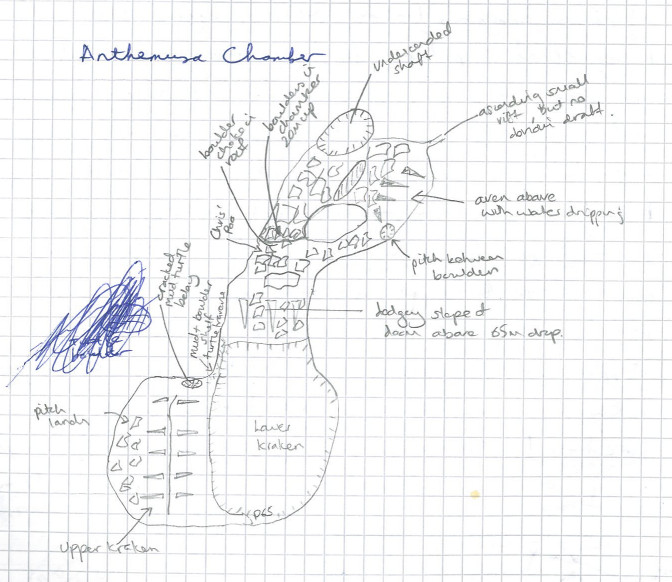