Martin Sluka arrived the previous evening but could only stay for the weekend (today was Friday) so we headed up to the Eishöhle bivvy. Martin got distracted by every single hole on the path up, and I got to look at several holes I'd not looked at before. We took the route variant which bypasses the climb by the double arrow - turn left rather than dropping down at the lightninged tree. Not far along, near a fault intersection, we investigated several holes. [Blank box presumably meant to contain a sketch survey] Further along the path, after rejoining the usual route, we looked at two holes on the right of the path 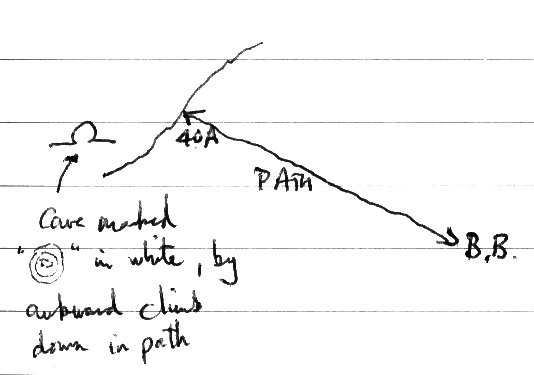 Finally we reached the 40A bivi and had a snack, then over to Eistunnel for a SVH tourist trip. Martin noticed an odd slanting hole near the base of the 50m snow cone, next to the first of 3 major drip holes. Hypothesize that this is formed by warmer air seeping through floor and so there is perhaps a passage beneath. Passage through ice slopes, for about 12m at 30-40°.