Outline Geology of the Loser Plateau 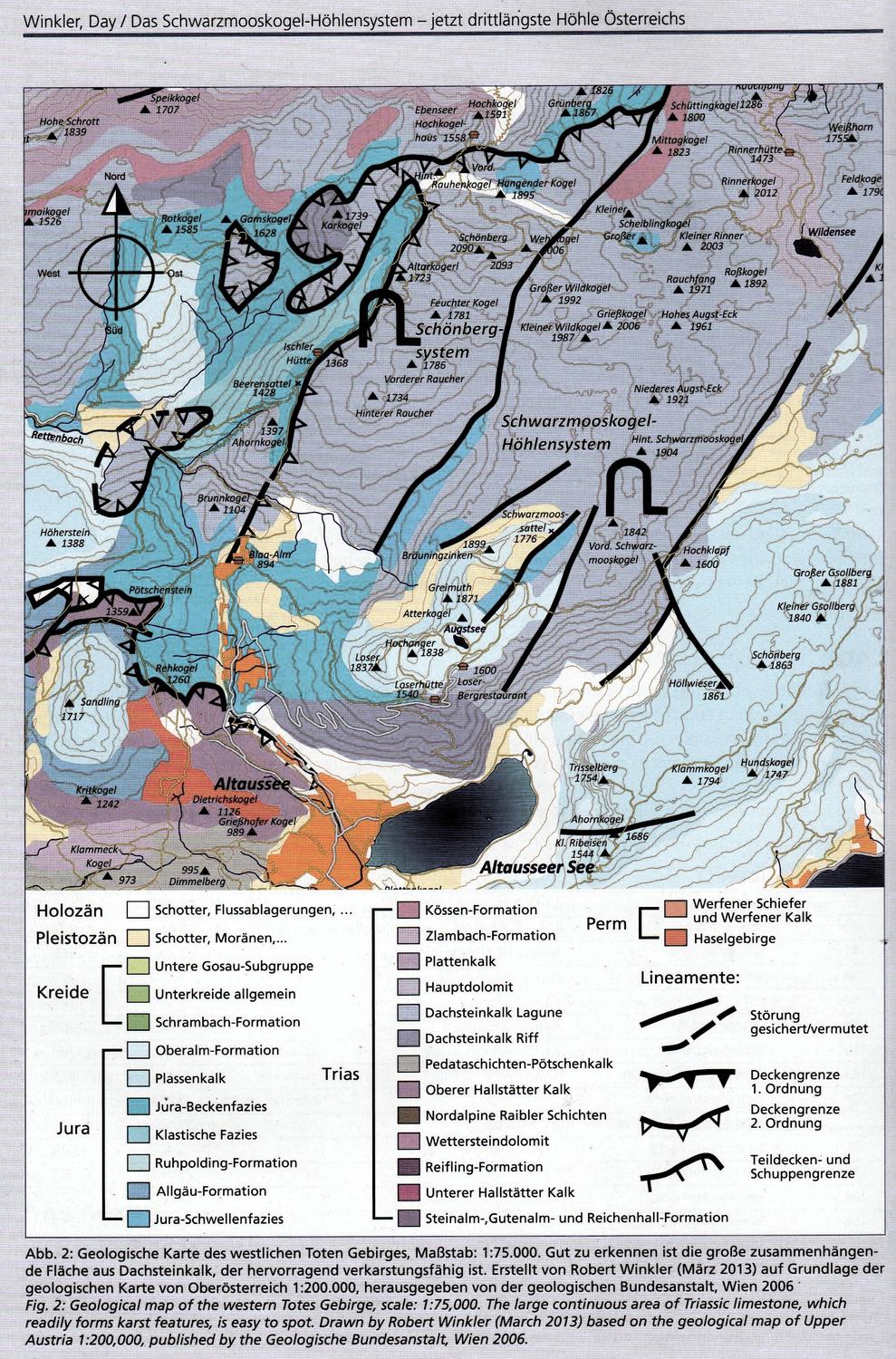 Much of the area of the Loser Augst-Eck plateau is rough limestone pavement (karren), liberally covered with dense areas of dwarf pine, and interspersed with small cliffs, open shafts and snow patches. To the new visitor, it all looks alike, and even to the geologist, there are few marker beds and no obvious structure. This tended to produce the attitude that "its all limestone, with caves in", and little more effort was made.

Articles speculating on the geology appeared from time to time in Cambridge Underground, written by people with varying degrees of expertise, and based on either limited literature searches or some evidence gathered "on the ground" - including a perusal of various cave surveys. Jared West's article in C.U. 1988 pretty much summarises the literature. A geologic sketch map of the area is based on "The Geology of the Eastern Alps", by Prof. E.R.Oxburgh (The Geologists Association, London, 1968): 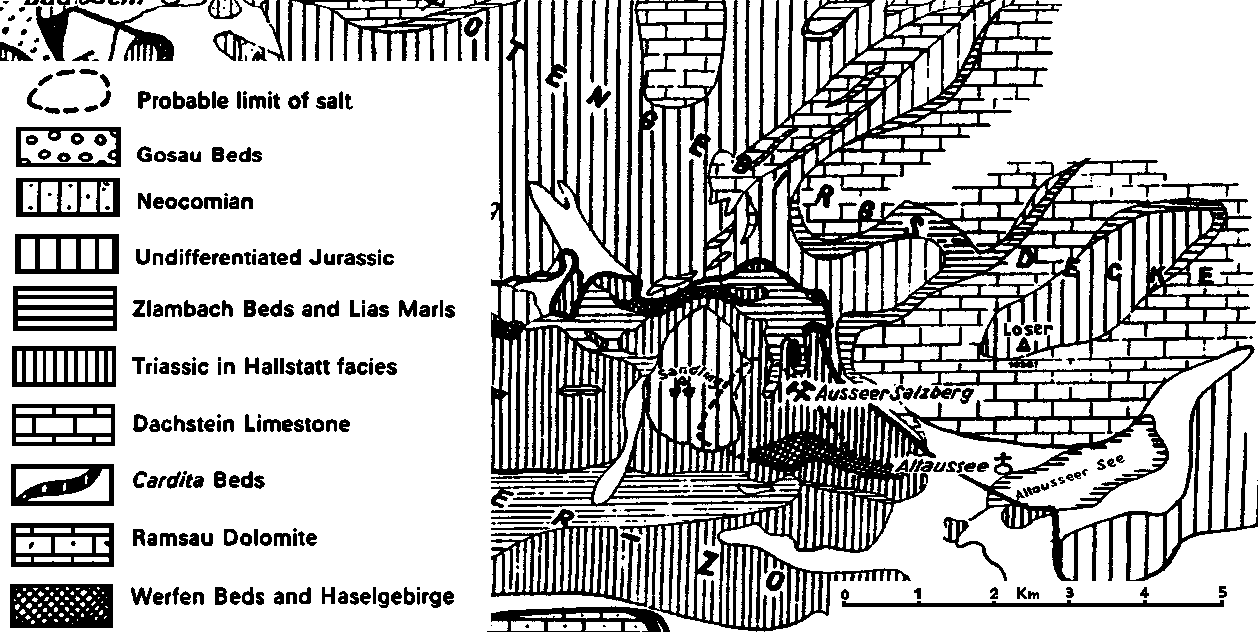 From this it can be seen that our area is composed of the massively bedded white Dachsteinkalk limestone of Triassic age. The summit of the Loser and adjacent peaks is more recent Jurassic limestones. The oldest of these, particularly obvious in the Bräuning Wall, are quite thinly bedded Liassic marls. All these sediments have been pushed NNE in the Totengebirgs-Decke, a massive thrust. This is bounded to the SW, roughly along the line of the road from Altaussee to Blaa-Alm, by a thrust plane. SW of this boundary, the surface is entirely composed of Jurassic sediments, with little of speleological interest. To the SE, the Loser block is bounded by a fault which runs along the NW shore of the Altausseer See. The Trisselwand is composed of Jurassic limestone, younger than the Liassic marls, and is also massively bedded and seems to contain at least some cave development.

Less obvious is the observation that in the Rettenbachtal to the west of Loser, Jurassic rocks are again exposed, separated from the Dachsteinkalk outcrop by a band of Liassic marls, which also extend NE up the valley of Grüne Bichl. This is apparently the trace of a second thrust plane, (higher than the one shown on the map above) where the Dachsteinkalk has effectively slid north lubricated by a layer of salt (which itself is most obvious in the local Salzbergwerk - salt mines). This suggests that the situation is rather more complex than the single thrust depicted above, but, if true, at least eliminates the idea that the Loser plateau is a nappe, with these lower beds inverted, and a shattered core at half the depth of the Dachsteinkalk which would prevent exploration to great depth. This is supported by direct exploration of the Stellerweg streamway, which has reached roughly lake level, which is quite near the level of the main thrust plane.

The Dachsteinkalk all looks very similar, and much of the rock underground is concealed by mud or breakdown, so it has proved very difficult to make any meaningful observations. It has become clear, however, that all or most of the vertical development in the caves is fault- or joint-guided, on two roughly perpendicular sub-vertical sets of faults/joints. That some of these are indeed faults is shown by clear offset of beds in a few places where prominent shelly beds act as markers. Some faults are also apparent running for significant distances on the surface, sub-parallel with the massive fault bounding the Loser block to the SE.

The fossil phreatic passages seem to be much less dependent on joint direction, and appear to follow certain beds of the Dachsteinkalk. The clearest example is Yapate Inlet and Chicken Flied Nice, near Burble crawl in Kaninchenhöhle. 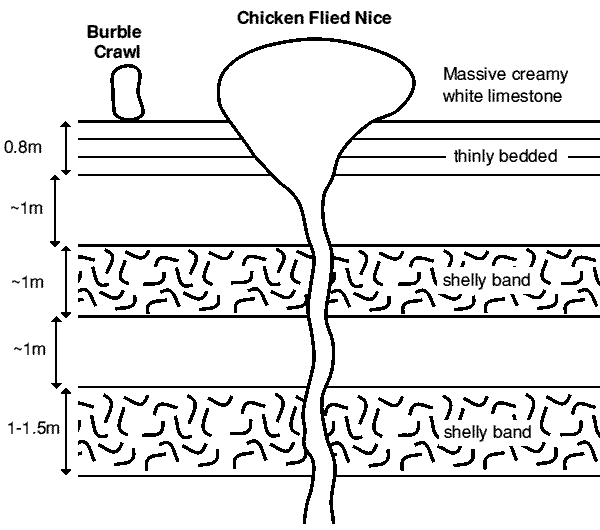 Here, the small inlet tube of Burble Crawl, and the original main trunk tube of CFN are both formed in a massive creamy white bed of limestone just above a 0.8m thick zone of thinly bedded limestone. At Staircase 36, the beds can be seen to be offset at a fault running roughly at right angles to the main passage, and Yapate Inlet, south of the fault, is formed in exactly the same bed, but a few metres lower in altitude. The much later vadose downcutting has revealed the lower beds including the two shelly beds containing many fossil bivalves. These fossils stand out particularly well on the wall of Staircase 36 itself, where they provided much-needed holds for the climb.