In with food + dumped it below Littleboy pitch which we thought could make a good camp then to the vast dumpof stuff at the top of Kraken. L+G already shuttling gear by the time R+I arrived(we took 2 hour to bottom Mongol Rally)(G took 15' to descend Mongo Rally + they took 2h to the top of Kraken). Large Marge + 5 tacklesacks plus the drill bag + some claptrapwere ferried across the traverse then we slogged them up the climbs to get them into Grand Prix. That broke the back of it. We took one load each to Little Boy (surprisingly Large Marge made it intact all the way) + found a campsite against the wall looking out to the pitch. R+I made a levelsleeping platform, dragging out the mud + putting in a retaining wall of boulders whilst L+G scoped out water, finding a good source midway down Indy Rally. Needs a scoop (e.g. a mug) but only ~10' to fill a Daren drum. We laid the tent flat as a groundsheet then mats. No draft + we weren't cold at night. We then all headed to the end of Indy Races. Rachel boltedthe draftng traverse but this immediately led to the head of the wet pitch so she + Luke surveyed then derigged it. George started to rig the pitch (Horrible Pitch), grumbling lots about shit rockwhich led to someugly, rubbing drops. We surveyed + then Luke + I fetched (?) the rest of the camp gear from the start of Grand Prix whilst George + Rachel surveyed 2 loops near camp.

Luke + Rachel headed to leads in Grand Prix which led nowhere but then they hit paydirt in the QMC on the left in Indy Rally before the water source. This gave 50m crawling then a junction. One way led in good-sized passage back to Grand Prix + the other way was drafting + left-going. George + I returned to Horrible Pitch + George quickly rigged down to a big ledge. This gave a short corkscrewing passage that led back to the conclusion (?) of Horrible Pitch but we were diverted for some time by some smaller tunnels off the horizontal route that I found. This led to some interesting, drafty tubes + possible leads. I put in some lousy bolts + then found the rope too short so, with relief, handed the rigging back to George + I returned to camp to fetch another bag of rope. George got down to a double ledge by a bridge with water flowing in. Here he ambled up a steep mud slope (er, do you know how far above that last bolt you are?) + put in a bolt (er, youv'e got loads of Hiltis, why not a Y-hang?) + ambled back down the slope, over a sharp rock ridge and dropped inelegantly (i.e. with rubs) to the floor. You could also go directly down from the double ledge to the floor. All of Horrible Pitch is dry despite lots of watery bits nearby. We ran around at the bottom + George managed to temporarliy strand himself up a climb up a mud bank. Geoge was pretty much surveyed-out by now but he steeled himself for one final slog doing the bottom + then the 2 pitch sections. We left it rigged. We found the otehrs asleep by the time we got back to camp.

Rudely awoken at 06:00 when Luke + Rachel got up to head out (I can't complain, I'd spent an hour or two yesterday morning rustling bags and shining my light at them trying to get people going). They had packed the muddiest rope the night before + headed out at 07:00. By then George + I had given up on sleeping so we got up + packed more junk + headed out at 08:15. George caught the others at the top of Mongol Rally and was out in 3h - yeah, yeah... Luke + Rachel took 5h and I took 4h (I ditched a rope at the top of Hangman's as I seemed to be going at snail's pace and both my jammers + my pantin slipped all the way up - poor technique according to Luke, sigh). End of my caving for Expo 2018 -221h underground for me :-) Off to Plonkermira [??] with VHO tomorrow to see how things look from the other side of the hill... 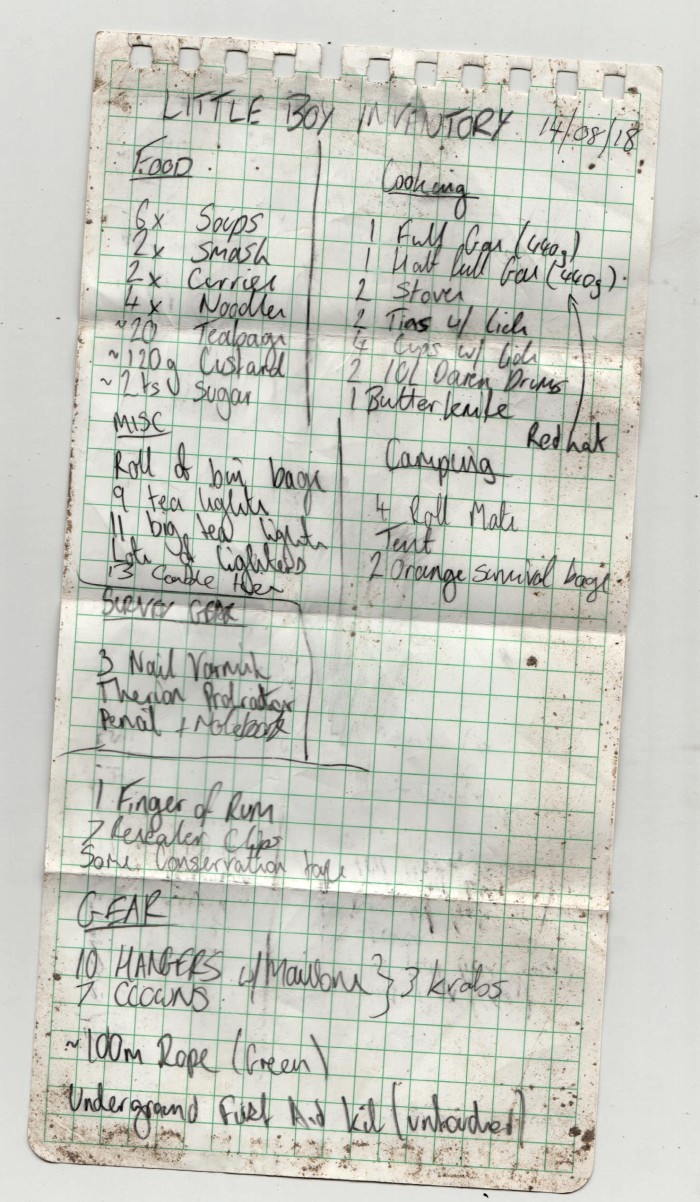 
Jacob, George, Olly
Balkonhöhle - to Tunnocks
As well as being my first caving trop of the expo, this was also the first Balkon-Tunnock's through trip made. George changed the hang at the top of Mongol Rally, added a rebelay and fixed another at the bottom of MR. Olly began to bolt the right hand wall of Floodland. He got so far down the pitch but didn't bottom due to time constraints. The connection between Balkon and Tunnocks is very impressive. Large chamber after large chamber. The Prusik out was a laugh! It was an introduction and a half to Austrian caving. 10/10 would do it again.