After a helpful surveying lesson from the Futrells a day before, I was ready to try bolting and rigging in a cave. After spending far too much time triple checking that we had all the necessary equipment, we set off into Balcony, aiming to continue where Frank left off. (As a matter of pride, not just because the destination was diabolically close to the entrance). Heading through Dig Dug, I was shocked to find George had little memory of the cave, and was forced to guide him through each section of the short passage. Arriving at the ledge, we decided to traverse. I set up the bolting equipment and got to work. This left George sufficiently bored. I offered the drill to him and he declined, opting instead to explore the cave he had already visited. 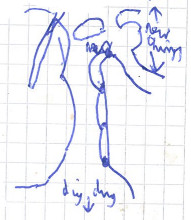 He arrived back after the traverse was rigged, and proceeded to critically critique the traverse, calling it resource intensive and unnecessary. On the other side we found 2 holes, one bearing north to passage and one more easterly is an entrance to a metre by metre tube. We surveyed the tube first, noting its remarkable length and draft, but alas, it eventually got far too tight, so we decided to leave it to those with more malleable bone structures. In the larger passage we found it led to a balcony overlooking the chamber we rigged, and further on it led to another large chamber, complete with another large, stomping passage to survey, which we would proceed to do the next day.