After a week of effort in 107, the general consensus was that it would be easier to find a connection from the 161 side, so Dr Day's Entrance Pitch Rigging Service was called into action. Trundled over with Rob and enough gear to rig to Strange Downfull, placing a minimal set of reflectors en route. Rigging in proceeded smoothly with few surprises (apart from one handline that had been removed near the start of Peurile Humour - reinstated) and flawless route finding as far as the top of knossos. Here I discovered that one of the bolts I wanted to use for the pitch head y-hang had been deliberately disabled, so the new rig looks like this: 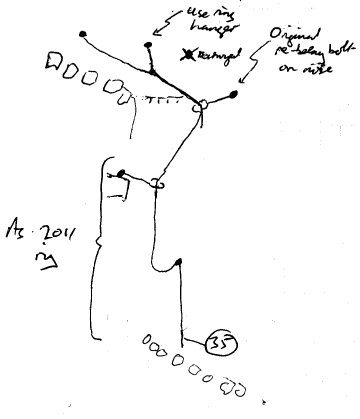 2014 Minoan Surprise/Knossos rig Route finding through Knossos/Star Wars/Tower Blocks proved to be a bit more tricky - some reflectors would be useful - but we eventually made it to Staircase 36. The rope for the traverse over a big hole near the bottom of Staircase 36 has been removed and should ideally be reinstated. I rigged Strange Downfall while Rob and Rob nosed around in Chicken Flied Nice without finding any obvious route through to Runnel Stone. With that we headed out - a most efficient trip.