234 - Hauchhöhle: How to knacker yourself in the least interesting way possible

Plan was to do a quick Hauch trip then a surface wander. Proceeded to bottom of pitch rigged by Earl on a previous trip, where there was a half-drilled Hilti hole. Drilled this fully, + placed a Y-hang (plus one duff spit that sank too deep). At the bottom of the pitch is a small (~5m x ~8m) kidney-shaped area of floor. At one end is a rift pitch-head blocked by a large boulder. I spent a while loosening it, but although it settled slightly it wouldn't shift. Drill battery unfortunately ran out halfway through the Y-hang. Stuart free-climbed down it (lunatic) and couldn't get back out again. I put in a very dodgy deviation + he prusiked out on the previous pitch rope. Apparently it is a ~4m climb initially and beyond this is a stream rift. While prusiking out I spotted a window in the side of the shaft. Swinging into this revealed an upwards-sloping tube about 80cm dia; I wandered up this for 5m or so to a leftwards bend, at which point I decided to come back another day with survey gear. HOWEVER while carrying out one of the tacklesacks through Doesn't Go Rift I did something rather odd to my back, so I haven't caved since. Buggeration. 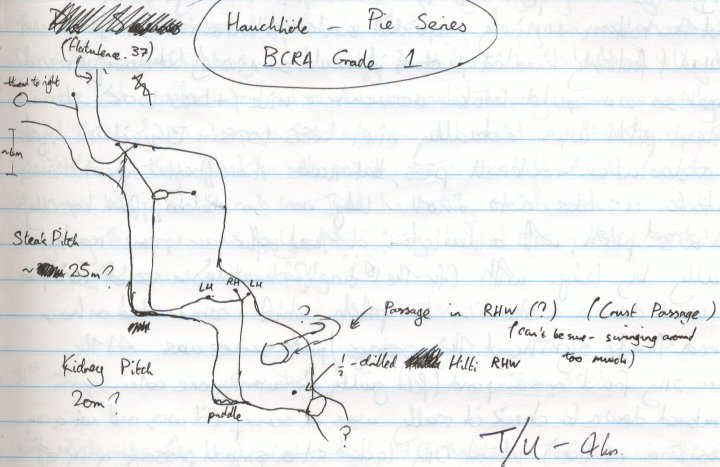