The Razor Dance team was all off for a long trip so we decided to join them since it's the dinner tomorrow. Bloody cold at camp + not feeling enthused with a damp furry but a lovely controlled descent on the clean rope cheered me up. Before that, on the first main hang bolt on Gaffered, I found the rope really tight. Having a handy Earl, I manfully sent him down to sort it. There was a yelp as he did a mini-plunge + then he said that seemed to have sorted it. Right down to Subsoil, rigged the tiddly 4m pitch (8m rope) off the boulder then started surveying out of Subsoil up Heavily Soiled passage (very muddy – again) (need a 15m rope rigged off obvious natural to get down to it) with a good draft. Initially large, steepish passage ending in a broken down area then popped out on edge of a large chamber. We were on a bank of mud only ~2m above the chamber floor but we had no gear. The mud was crumbly and Earl was very cold so we stopped there. Also a drippy aven ahead there, again tricky to get there despite being very close given the dubious tensile strength of banks of undercut mud. Stopped the survey + stomped back to Subsoil. Earl then took the drill to put in too spits (last, highest one possibly dodgy as the rock cracked as he set it: "I think this is the best Hilti I've ... oh dear") Meanwhile I conservation tabled some crystals + the mud floor at the start of Hippo Hollows + the mud banks + spires at the bottom of the Subsoil chamber. Then we went up Earl's new 17m traverse into Earthenware passage, + we surveyed as we went in, past various mud pretties + pools, stepping over a large + wet rift pitch + lots of QMs until Earthenware passage reduced in size (but sill drafting? hard to tell – draft is very strong into your face at the start of Earthenware). At this point we decided to survey down the large passage off left that led steeply down + twisting (Stoneware, as we finally lost the mud), + ended in a muddy aven + then a drippy wet aven at a convenient 6.55pm, time to go home. Took the drill battery out. For two people it takes ~ 1 1/2 hours to get to the bottom of Subsoil and ~ 2 1/2 hours to get out again, if carrying no real load. 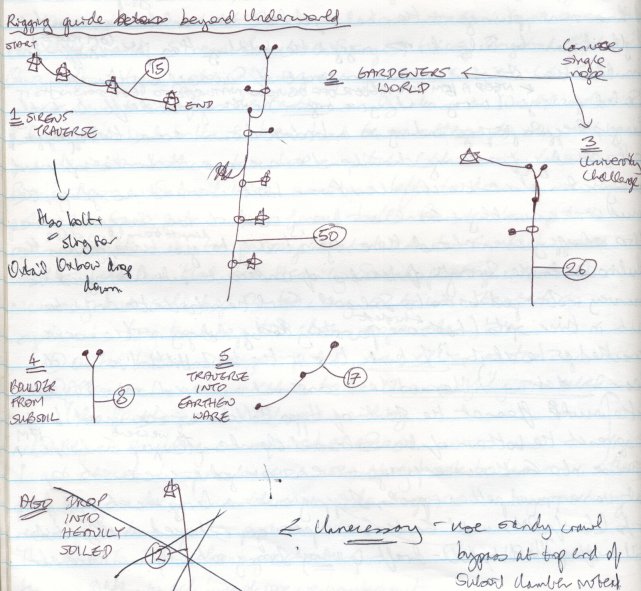