Mike Richardson has been on expo in the following years: 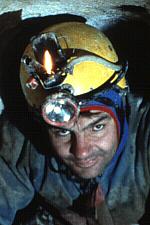 The proud owner of Rover, currently still the only expedition vehicle to have been older than its owner.