Typhon and I went for a walk to find and assess the new bivi cave which Anthony found earlier this expo. We walked via Fischgesicht (FGH) and Homecoming (HC) and spent some time cairning the path from FGH to HC. It needs reflectors to be added to the cairns soon. It takes ~30 minutes to walk to FGH and then another ~30 to get to HC. From HC, walk northeast past the rope and through a break in the bunde. Follow this around to the left and aim for some slabs. Once on the slabs you should see green/white stripes of spray paint which mark the hunter's path. Follow this north, up the hill, for about 30 minutes until you reach a 1.5m high obvious boulder near a lone pine tree and the plateau levels off a bit. Garlic Cave (GC) is in the large depression ~20m in front of you. A GPS tracklog is available containing our prospecting route for the day in /loser/gpx/2018 . A waypoint marking 2018-ad-02 (GC) is in essentials.gpx. 2019-ad-03 is a small hole in the side of the depression ~10m NW of GC which could potentially be used for storage. Photos of both have been uploaded to expofiles/photos/2018/PhilipWithnall. Sketch survey of GC (grade 2, total bullshit): 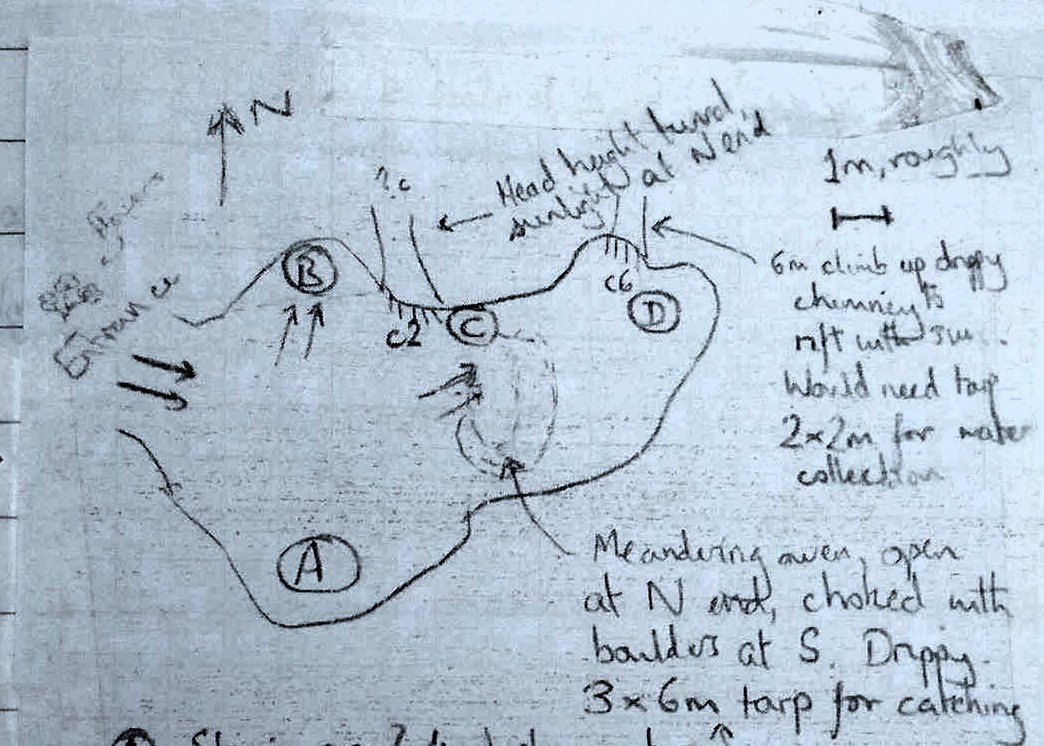 [annotations on sketch transcribed below]
[] 6m climb up dripping chimney to rift with sump(?). WOuld need 2x2m tarp for water collection. [] Head height tunnel, sunlight at N. end. [] Meandering aven, open at N end, chokled with boulders at S. Dripping 3x6m water tarp (min.) needed for catching water. [A] Sleeping area? 4m high. Easily accomodates 8with minimal digging required to flatten floor. [B] 1.5m high scrot hole. Storage? Or sleeping for 4 troglodytes if dry. [C] Cooking area or communal area. 6m high. Could do with a terrace - half a day's work. Space to bolt a stove to the wall. [D] Drippy end of the cave. Probably best for water collection? Lowest floor. Aven to N. probably too hard to tarp.for sleeping but should be OK to tarp for water collection. Overall, bivi cave is a little smaller thn the stone bridgein floor area but much roomier in height. Needs some floor landscaping but not as much as the stone bridge! Water collection is not a problem even on a sunny day (still dripping) - leaves some question of how wet the cave gets when it rains and how permeable thewhole of the roof is. Most of it looks dry but some walls are damp. Lovely views of the ridge and slabs. Would suit an owner looking to invest in redecoration. On the market for 3 packs of noodles, a bottle of port and a jerrycan of water. Typhon named it Garlic Cave because the entrance smelled of garlic. [Editorial addition from GPS positions in survey data] 2018-ad-02 is

or in more usual terms: CRUSHED GARLIC CAVE
Grade 2 survey
Small crawly tunnel 10m NW of GARLIC CAVE 10m up a 45° boulder ramp.
Entrance is 3m below lip of the depression. Philip has some photos on his camera . Entrance is waypointed as 'bin cave' in Philip's phone. Cave is stooping passage on 12m toa small open chamber with bunde at its top. A flat out crawl is visible for a further ~6m to sunlight. 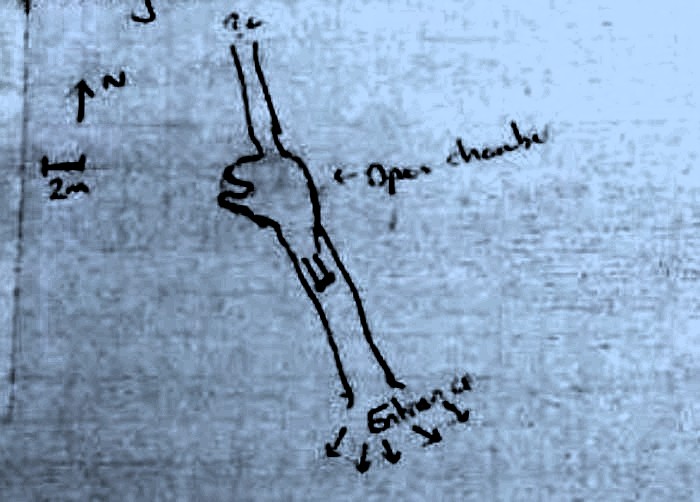 Could be used for extra storage for Garlic Cave. Now numbered 2018-ad-03 and in essentials.gpx. Not physically tagged yet. LES TRES DENTS Grade 2 survey
3 holes in a rift aligned E-W, immediately NNW of an obvious knobble of bunde (20m x 20m round). There is a lone pine tree 20m east of that. Each hole ~20m deep, pebble bounces a few timesafter hitting the bottom - may be a hading passage accessible from the rubble pile. Significant snow block in eastmost hole. All 3 holes look to connect. 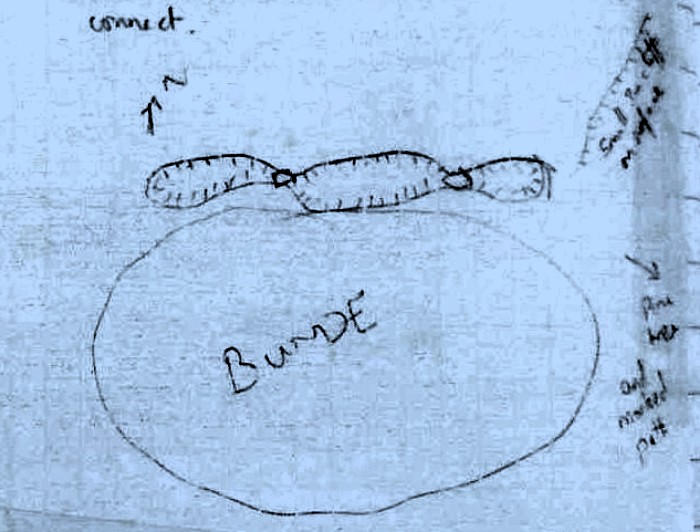 Small cliff on surface
Pine tree and marked path to east.
Only available as a waypoint in the prospecting GPX file. Not physically tagged or dropped yet. 2018-pw-02
2x1m shaft with 3s drop when rocks bounced off E wall. Shaft is at S end of a 30x40m depression with cliff tiers on N side. Photos on Philip's camera GPS. Waypoint on Philip's phone. Shaft is just N of a 10x5m knobble of bunde. { We came back on 2018-07-25 with Frank Tully and dropped this.See next page for updated notes and elevation. It craps out. Cave left untagged. Waypoint in prospecting GPX file. } 2018-pw-03 LEFT MY COMPASS IN THE OTHER CAVE
10m horizontal rift. dripping with 90° 'L'-bend 7m in, then dead end after a further 2.5m. Stoopy loose ceiling. Photos on Philips camera. GPS on Philip's phone. 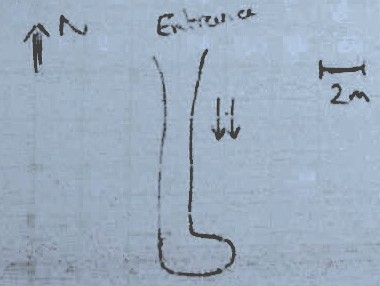 Entrance in the East wall of a large depression (which has 2018-th-02 at its south end), roughly 10m deep. 100m N-S, 10-30m E-W. { After discussion with Elaine, the german name for this cave is Verliessmeinenkompassbeideranderenhöhle höhle. Note the duplicated höhle is necessary. Waypoint in prospecting GPX file. Photos uploaded to expofiles/photos/PhilipWithnall. }