Underground just after 9am. I had not been to the deep stuff in Tunnocks before, so I waited at the bottom of Caramel Catharsis for Becka (Rob had gone ahead) and route finding instructions. Apart from the bottom of String Theory, I did not have too much trouble finding my around, and we were at camp just after 12:30. From here, we went to try and push a lead below Snake Pit, which is very Yorkshire-ish stream passage. We followed it to a pitch which had not been dropped. Once Rob had bolted it, we surveyed to another deeper pitch which took he stream and (we assumed) dropped into Song of the Earth. We then derigged our way up to the bottom of Octopussy. From here we went into the far north of Slackers to investigate a lead that George had been talking about that morning. For a while this tested Beckaâs route finding ability (she was the only one who had been there before), but eventually we found ourselves above Grike of the Earth. The lead was above this, up a short handline climb (which gained a not-so-helpful rebelay at the request of Becka). The pitch we dropped led down to a large drippy passage which carried a small stream. After 20m the stream disappears down a crack in the floor while the way on continues above this, with one hole below that presumably leads back down to the stream which we left as a question mark. The passage became smaller and draftier and, below another short pitch, became steeply sloping with a dry muddy floor. By this point it was 9pm and in order to sleep at any way a reasonable hour we had to leave, which took some careful diplomacy by Becka and I. it was still a promising lead and would need to be visited again one day. We named it Beckoning Silence. On our way back we derigged everything below Camp, and then ate everything we possibly could at camp before bed. Despite missing/failing to set our alarms we were up and ready quite early and we were all on ropes carrying other ropes (and drills and poo etc) by 9:30am. Rain was forecast for the afternoon so we wanted to make sure we were all above Procrastination with plenty of time to spare. All went very smoothly until the entrance pitch, where we had to pass Ruairidh, Aidan, Fleur and Pete on their way down. Got to the surface just in time to get rained on on the walk back to Top Camp. 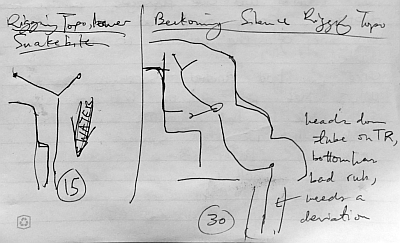