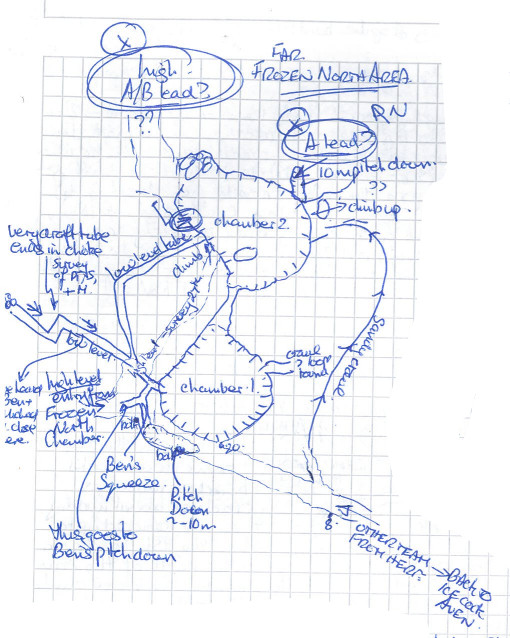 We followed route of previous day from Frozen North Chamber to the chamber. Sarah placed first bolts to get into A lead heading south. We found footsteps in it ! And then a survey station ! And the other cavers !!! So this connects back into "Ein und Zwanzig Chamber". Connected at their station number 8. Then Ben dropped short pitch down to gain chamber 1 via a short tube with right angle - two junction tubes in this area were exlored later in day. Chamber 1 had a crawl on far side that connects into known passage in ~30m. Chamber 1 quickly connects to Chamber 2 via short tube. Unfortunately Chamber 2 ends at a solid boulder choke. There is a good (A) lead in right side of Chamber 2 - which is easy 10m pitch down into rift. Looks interesting. Matt climbed up from Chamber 2 to meet the end of a sandy tube that other had pushed. LEADS: (X) 10m pitch down from Chamber 2 - easy Y-hang at top. (Y) There may be a high level that can be reached by 3 bolt traverse from (Z) Lower Tubes off Chamber 1 - Back in these tubes Ben et al dropped a pitch - and they found "300-200m" of tube-passage beyond, that ended in a choke (Martin et al surveyed to pitch later in day). - Pete, Sarah; Matt followed a walking tube from Chamber 2 that linked back to Chamber 1 - near survey station 26. They then followed a VERY drafty tube north for ~40m to a choke that also drafts. En route they heard Michael and Ben in their leads. My feeling is that leads X + Y are well worth a look - more so than tubes ??