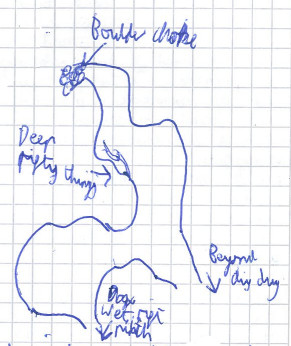 George and I acquired Sarah, who was keen to see our very promising lead and my traverse. On location she took the same attitude as George, insulting both the theory and application of the bolting and rigging. I would not let that faze me, due to the large, obviously going, passage that we had yet to survey. This did not go to plan. First we had Sarah make a questionable descent into the pit so we could document the pitchhead it leads to. Then we did the exciting beginning of the open passage. It quickly ended in a large boulder choke. After some frustrated, emotional attempts at digging our way through, we realised it was futile. We instead crawled through some holes to survey the rifty things that were aluring underneath the passage. The bottom of the rift was accessible by a rather suspect free climb, so we sent Sarah down for a look. She found that the bottom went nowhere in both directions, so for safety reasons George and I abstained the climb, thus ending a rather disappointing day. We derigged the traverse, hoping it would be used for more fruitful endeavours.