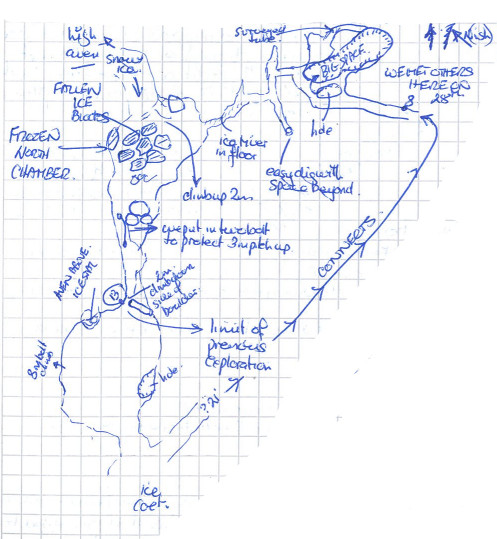 We watched the rain come down until boredom made us crack at about midday. Then we headed up to the "94a, 95b" lead area to the north of the cave. We located the loose climb up to the fallen ice cock chamber and then found the limit of exploration at station 13 in the next chamber. Here we climbed down to a short climb back up - where Pete placed two bolts to allow a mantleshelf and squeeze into the next chamber - which was veery preddi. Lots of fallen ice blocks on the floor. Fleur took photo. On the far side of the ice blocks a very high (30m) aven headed steeply upwards, and has a snow and ice tongue. (Ben later made more progress to climb a way up this ... but steep).
We then climbed ~2m up to right of chamber to enter a walking/stooping tube with a nice river of ice on floor. We thought it would soon crap out - but we were rewarded with a nice view into a chamber/rift. Huzzah! We first survey a tube that looped to NW, ending with a view into the chamber. Pete scrambled round wall, and may be a high lead here. With a 1160mm book, we wombled back out to camp