The plan was to go and find Organhöhle (located by Wookey and Olaf in 2012) plus swing by some of the holes Duncan and I found in the same area in the same year. Since expo was quite sparsely populated, we decided to take advantage of drill availability to drop some of the short pitches we had found. We decided to take two oversuits, two helmets and one SRT kit between us and also some surveying gear to give ourselves the option of verifying that we really had found Organhöhle. Things did not go entirely according to plan. We first swung by Tunnocks to pick up an SRT kit. It was at this point that I realised that I hadn't seen any rope being packed. It was hot and fairly late so we pressed on to Balkonhöhle from where we took a somewhat roundabout route towards Organhöhle via a subsidiary summit of the Hohes Augsteck. Coming off the back of this, Dan spotted a cave. There is a hole in the side of the cliff leading onto a rift pitch, with another couple of surface shafts above that go to the same place - definitely worth a tag. Since we had a drill, this should have been a quick job. However, a lack of drill bits was going to make it a lot harder. Fortunately, we had a hand bolting kit, so I made up a tag (2015-DL-01) and Dan set about placing a hand bolt for it. Whilst Dan was drilling, I set off in the direction where Mark's GPS said Organhöhle was supposed to be. Found a hole in the right place, and headed back to Dan who had by now stopped drilling - not because the bolt was complete but because the head of the bolt driver had sheared off. We all trooped over to the Organhöhle candidate entrance, where we could have started surveying.... if we had brought a tape measure. I donned oversuit and helmet and set off to verify that we had the right cave. After a bit of walking / crawling I found a decent sized pitch with two spits for a Y-hang at the top (one of which looks good, and one is shagged) - so I'm pretty sure we've got the right cave. It looks a bit like this: 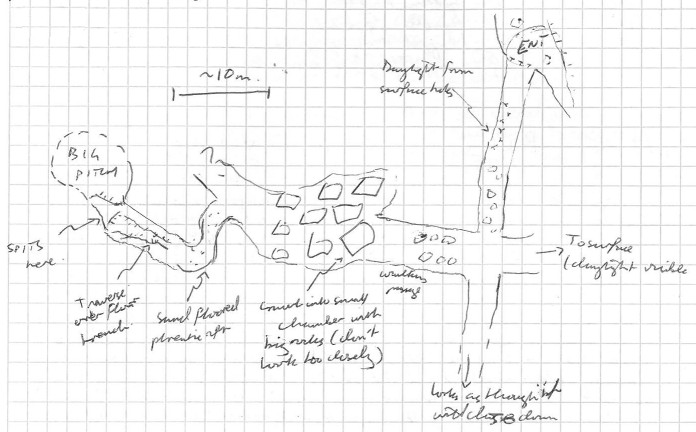 With that we headed back towards Top Camp via a more direct route, placing cairns as we went. Eventually we picked up a cairned path that I suspect goes to Bullet's 2nd Höhle. This route is fairly direct and the terrain reasonable, but it is going to takae a while - likely over an hour from Balconyhöhle. Our final act was to take a look at Ants in Pants schlucht. The snow level looks pretty low, so this might be worth revisiting later on expo.