Back to Pit Pot. We derigged the deviation & pulled up the rope from the previous trip and swung on to the boulder bridge. I was drilling -> put in a couple of bolts on the rock bridge & abseiled down a very short pitch ~3m. Landed on a boulder + mud slope. This was rather treacherous, particularly near the edge of the slope where there was a vertical section. I put in a couple more bolts on the left hand side of the passage to attempt to keep us away from these boulders. Was OK but not great. Landed on a boulder floor, then called Nat down. We had been surveying at each stage of the rigging, so Nat had been sat on a boulder on the boulder slope whilst I rigged (and generally made unhappy sounds at the boulders). In this time, Nat had managed to sit on his nail varnish - breaking the neck & pour nail varnish all over himself & the boulder. :( Anyway Nat joined me on the boulder floor. I had thought that this pitch was blind, but turned out there was a rift heading off. This was a short pitch, which Nat rigged. It wasn't easy as there was limited choice due to crap rock. But rig it he did & down he went - making unhappy noises at the boulders. I joined Nat at the bottom (~7m) and we were in the rift, surrounded by boulders wedged in the rift. It wasn't my favourite place in the world. The rift continued, which would mean climbing down, under the boulders. It is drafting. We have decided this should be a QMB. It's a good sized lead & is drafting. However the boulder slope before isn't very nice & it's likely that the boulders will get worse. If this was to be pushed the rigging would need further thought. As there were other leads, we derigged this for this year. Rigging + Pitch Topo 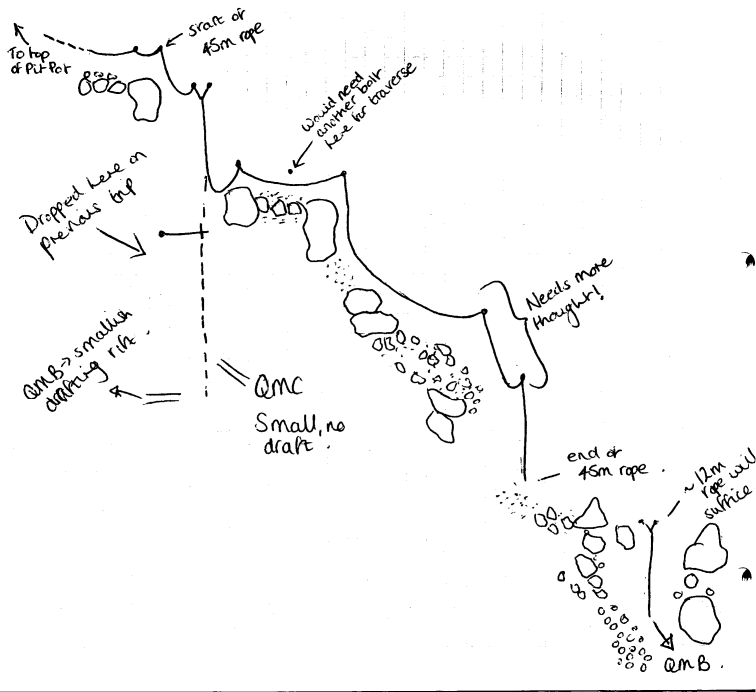