Noel, Mike and Andrea had set off nice and early to go look at some of our leads from the day before, including a traverse that wanted bolting. Using a drill tends to go more easily when the drill has a bit, though, so when Noel came back to get one Holly and I came along to the cave. Noel added a backup bolt to the top Y-hang then I descended first to fettle the rigging. After lots of waiting for people to descend to avoid bouldery death we set off to rig the traverse. While Noel was discovering a chasm too wide to traverse across Holly and I were looking at the parallel shaft we'd found, and we made a sound connection between the two (unsurprising, as Noel described around the corner of the pitch as a rift). We decided to leave that traverse alone for the time being and as Noel derigged I took everyone else to Liar's bakery, the ?B, for Mike and Andrea to poke around in. Holly, Noel, and I then went to traverse the parallel shaft Holly and I had visited instead. Traversing over one pitch led to a second hole in the floor, giving the area the name Pit Pot. Traversing over the second pit landed on a rubble-covered ledge with a small window leading to a nice big pitch! Rocks fell for ~3 sec, so we estimated the depth of the shaft at 60m. We surveyed to the window -a whopping 13m - and headed out. Mike and Andrea had had rather more success, surveying 109.13m ending in a (dry) ~40m pitch. There are still plenty of leads to go back to, not too bad! 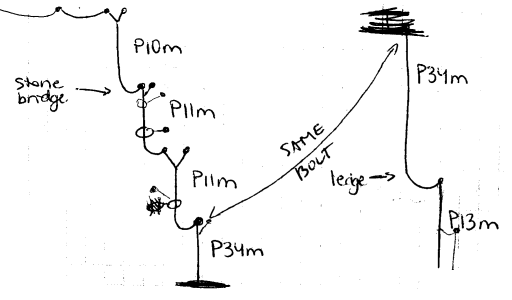