For more than four decades, Cambridge University Caving Club, CUCC, have explored caves on the Loser Plateau, about 80 km east of Salzburg in Austria. The cave system we have discovered and explored over these years now extends to more than 150km of passages and shafts.

The expedition runs in the Summer, usually July/August.This website (over 800 pages and over 700 images) contain much of the documentation from the exploration of these annual expeditions.

For those coming on an Austria expedition for the first time, this great bulk of material can seem a little overwhelming. However, it's important for people to have some idea of what they are coming to, in order that they can get the most out of expo. It is probably worth starting with the Expedition Primer - a document intended specifically for new expo members, and leading to some of the more important pages which you should read in the Expo Handbook. 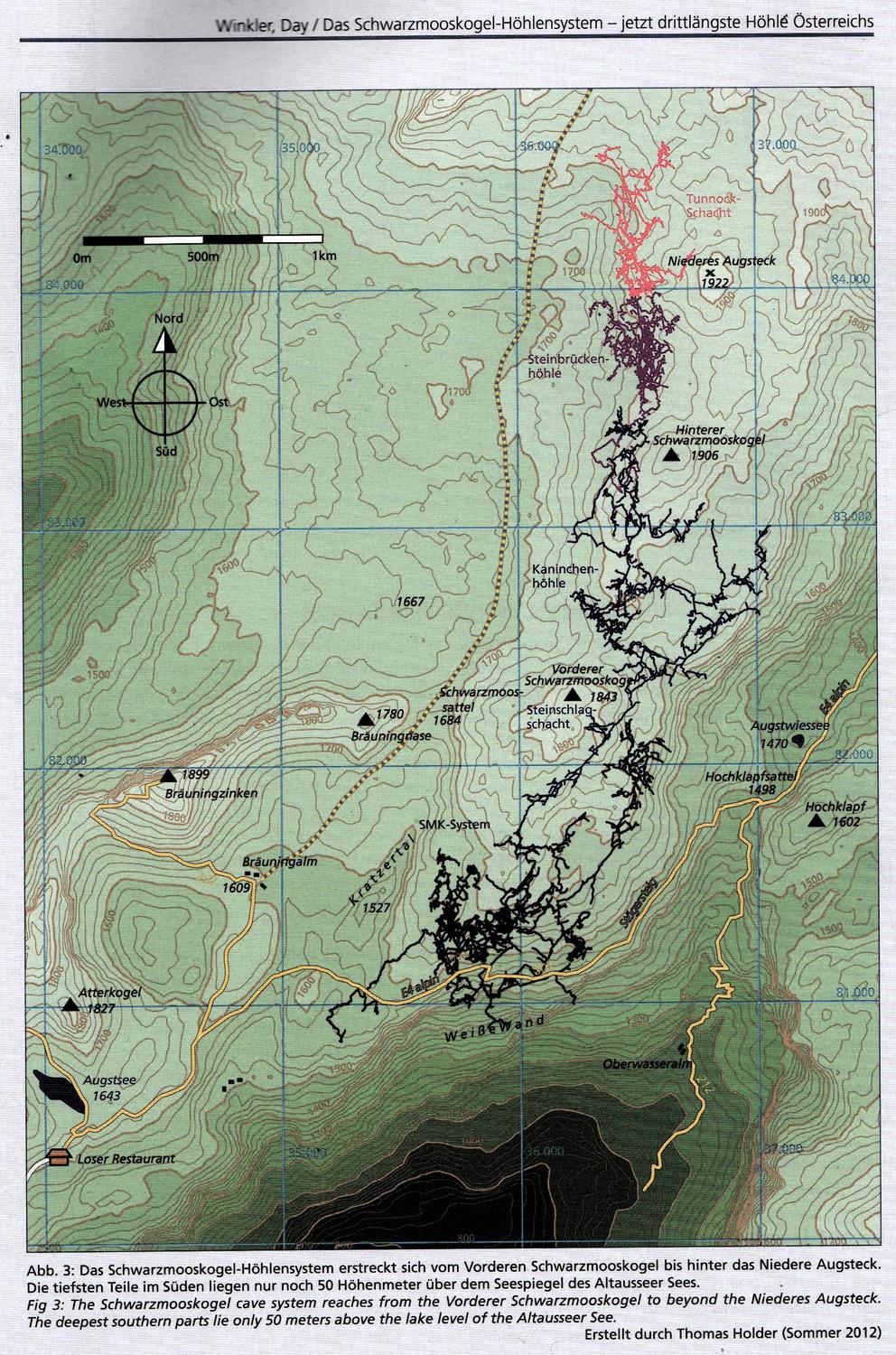 Northern Branch (an informal group of CUCC graduates) first visited Austria in 1976 as something of a reccy, but 1977 saw increased numbers, definite objectives and the first undergraduates from CUCC. From 1978, the annual expedition has become largely a CUCC undergraduate-organised affair, but with many ExCS (ex-Cambridge Speleologists) still taking part.

Although originally we camped at Altaussee, by the lake, since 1983 Base Camp has been at Gasthof Staud'n'Wirt, by the Grundlsee road from Bad Aussee, where we are annually made very welcome by Hilde and Karin Wilpernig and family.

Only in 1986 has an expedition failed to visit Loser, and a substantial part of the journal of CUCC and exCS, "Cambridge Underground" is taken up by expedition reports. The majority of these are reproduced within these web pages and can be reached through the list of published reports.

Accounts of these expeditions also make it to all the usual places, such as the BCA Speleology magazine or occasionally Descent, and also to the journals of the various other clubs to which various expedition members also belong. Much of this material is also being incorporated into these pages and can be reached through the above list.

Most of the expedition logbooks which we still possess have also been transcribed, and these, too, appear in this archive. When reading the logs, please bear in mind that the authors (often shattered after a hard day's caving, or, even more likely, drunk), never expected these accounts to be read by a wider public. Whilst some accounts are detailed and factual, others are.... lets say "informal" :-)

Since 1988 CUCC has received generous help from many companies, mostly in the form of food. We are grateful for this support and are happy to promote the names & products of our sponsors.

Thinking of visiting the area independently ? Then please read this.

This archive is constantly being updated as the current year's work is integrated into the whole.

We need to know what you think about this site - did you find your way around easily? Did you find any errors, omissions, some confusion? Are there areas where you would like more information? If so, email one of the maintainers.