From the Loser Panoramastraße Bergrestaurant car park (bottom right of picture), take the path leading from the NE corner, which is slightly shorter, and soon joins the main path. Alternatively, follow the main touroid path, numbered 201, and marked with red and white paint at frequent intervals (heading up left of centre in the picture). Following this gently undulating path for ten to fifteen minutes leads to Egglgrube. To the left is a valley containing several obvious sinkholes, with a junction path leading to Bräuning Alm. Ahead and to the right is a 10m cliff rising from the pasture to an area of karren and dwarf pine.

Follow the main path 201 straight ahead up a break in the small cliff and continue over karren which is well covered with Lärchen (dwarf pine, spuriously known as "Bunde" within CUCC). A T-junction is met, left leading into the Kratzer valley (an area explored by group believed to be German), while right is the main path. This junction is easy to miss on the return in mist or at night. A few minutes further on, where a cave is marked by a large red Omega in the middle of the path (1623/28), there is a junction path to the left, and Laser-fixed point 7/9 marked with a bolt.

The lower entrances to the Stellerweghöhlensystem are reached by following the main path, described elsewhere. Caves around "The Nipple", including all the higher entrances to the Stellerweghöhlensystem, and a number of caves not explored by CUCC, are reached by following this junction path. This starts out well-marked with cairns and red paint spots/arrows. After a short while, it traverses below a cliff on the left. At the far end of this, a climb up reaches a well-hidden route to Schwabenschacht (1623/78). 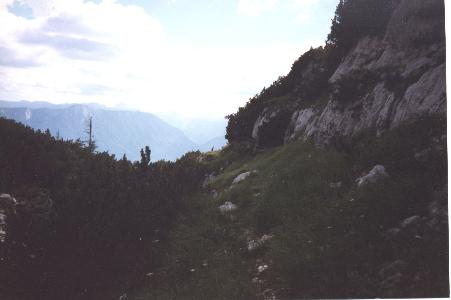 View from the path between Stoger Weg and the Nipple. The gemse on the path ahead is
near the point where the Schwabenschacht path branches off. Photo © Paul Hammond 1999.

The main way leads uphill for about 30 minutes to the back of a limestone knoll known as The Nipple (German groups call this Weiße Warze, and in older CUCC logbook accounts it is Bunter's Bulge). Beyond this it becomes harder to follow. There is a laser point on top of the Nipple, whilst caves 143 and 144 are on the SE side. This point is between an hour and an hour and a half from the car park, depending on load / fitness / familiarity.

Beyond the area of the Nipple, the path continues into the Eishöhle area.